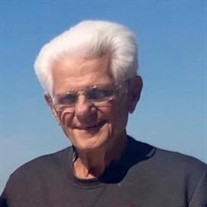 Larry Joseph Pavel was born on April 4th, 1943 in Dodge, NE to Joe and Marie Pavel. Larry, the oldest of three children, was later joined by sisters Jeannene and Karen. Larry graduated from Dodge High School then attended Wayne State, earning his degree in Secondary Education, and went on to teach Math and Science at high schools in Nehawka, Dodge, Fremont and Blair. Larry married Eileen Tichota in August of 1964. Larry and Eileen had three children, Jolene, Scott, and Vicki. Larry believed in hard work and supplemented his teaching salary with various jobs including landscaping, painting houses, and selling insurance. Selling insurance eventually became Larry’s passion and he retired from teaching to start his career in insurance, a passion held by him right up until the time of his death. He worked hard to make sure his clients were taken care of. Selling insurance went so well he decided to buy his own agency. The Pavel Insurance Agency was born. Larry thrived in this business, using his hard work ethic as an example to instill a no-nonsense attitude to his family, clients, co-workers and friends alike. Whether talking business, sports or life; there is nothing easier than having a conversation with Larry over a drink. On July 23rd, 2000 Larry married the love-of-his-life, Donna Duree, welcoming a new family into his life. Larry treated Donna’s family just like he did his own blood. Offering a helping hand to her kids and grandkids whenever he saw the need. Donna passed away June 6th, 2011. Larry continued to be involved with Donna’s family as her children and grandchildren continued to grow. In 2014, Larry committed to Mary Ellen Eglseder. They enjoyed about as stereotypical retired life as you could get. Golfing four days a week, spending their winters in Florida and living life to the fullest were their favorite activities. Larry loved his Grandkids and supported them in any way possible. Whether that be spoiling them on birthday shopping trips, making them work for their Christmas money by putting it in a puzzle box, or attending every sporting event he could. Swimming, hockey, baseball, or volleyball; It did not matter what they were involved in Larry would be there. Larry stayed busy as long as his body would allow him. Even over a summer of a pandemic where he was immunocompromised; he still attended his Grandson’s baseball games and got in a few rounds of golf. Surrounded by his three children, Larry Joseph Pavel passed away in the early morning hours on November 26, 2020, Thanksgiving Day. We all had a little bit of Crown with our Thanksgiving dinners. While cleaning out his office, Larry’s kids found a yellow note pad. Yellow note pads were Larry’s version of the iPhone. On this note pad, they found written “8 rules 2 kick ass in life:” 1. See failure as a beginning, not an end 2. If you don’t go after it, you won’t get it 3. Always do more than is expected of you 4. Assume nothing and question everything 5. Make peace with the past or you’ll pay for it 6. Stop thinking so much and START acting 7. Never compare yourself to others 8. Teach others what you know If those rules do not explain the type of life Larry liked to live, think of John Wayne, his favorite movie star. The characters John Wayne played were often tough, hardworking, no-nonsense men who stood for what’s right and took care of who they loved. Along with having a collection of John Wayne memorabilia featured in his basement, some of Larry’s favorite movies were “The Cowboys” and “True Grit.” A John Wayne quote that captures Larry’s personality, “Courage is being scared to death but saddling up anyways.” A private memorial service will be held for the family at Bethany Lutheran Church with inurnment in the Resurrection Cemetery Mausoleum in Omaha. The family is establishing The Larry J Pavel Cancer Support Fund to honor oncology nurses and support families of cancer patients. Memorials can be left or mailed to the funeral home. There will be a Celebration of Life in the spring at one of Larry’s favorite Golf Courses. The Reichmuth Funeral Home of Elkhorn is caring for the Pavel family at this time.

The family of Larry Jospeh Pavel created this Life Tributes page to make it easy to share your memories.

Send flowers to the Pavel family.