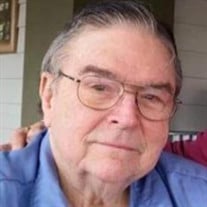 Laurence (“Larry” or “Frank”) Sheldon, Jr., of Elkhorn, died peacefully at age 80 on Wednesday, March 11, 2020, in Omaha. He was preceded in death by his parents, Laurence and Sybil (Wood) Sheldon, and his brother, David Sheldon. Larry is survived by his wife, Patricia, of Elkhorn; daughters, Sandee Sheldon (Ryan Schmidt) of Los Gatos, California, Marj Skowronski (Andrew) of Omaha, and Laura McClanahan (Bryan) of Overland Park, Kansas; two step-grandchildren, Sydney and Jackson McClanahan; and his two beloved cats, Midnight and Spooky. Before retiring, Larry worked in IT at Creighton University in Omaha and Pacific Telesis in San Francisco, California. He was also a veteran of the US Navy, serving from 1956 until his honorable discharge in 1960. In retirement, he tried his hand at long-haul truck driving. When his daughters were young, Larry was a devoted supporter of all their endeavors: softball, soccer, and marching band in particular. Weekends were spent traipsing around California with a car full of kids headed to competitions. He spent many hours grooming softball fields to ensure the girls’ fields were as nice as the boys’. Many of his daughters’ peers will remember his vocal and enthusiastic support of their teams and his passionate opposition to poor refereeing. A craftsman to his core, Larry utilized his innate talents to create custom woodwork in his home, to repair any broken thing that crossed his path, and to design and build stage sets for school productions. No task was under-engineered: Using a chalk line, he meticulously laid out a precisely dimensioned hopscotch court in the driveway for the neighborhood kids; on a weekend, he drilled holes to set posts for the tallest swing set in the neighborhood in the backyard. Wanderlust led Larry to outfit his pickup truck with a camper, and he drove his family all around the country, including a six-week driving trip to Alaska. Family dinner conversations revolved around the meaning of arcane words and day-to-day happenings, and Larry’s thirst for knowledge led him to read (for fun) books on string theory, politics, history, economics, and electronics, among other things. (His daughters will have a “fun” time trying to find new homes for his personal library.) A keen observer of his surroundings, Larry had a love for all things related to the natural world. A private family service will be held on Tuesday, March 17, 2020 at St. Augustine of Canterbury Episcopal Church at 285 S. 208th St. in Elkhorn. Memorial contributions may be made to the Nebraska Humane Society in his honor. The Reichmuth Funeral Home of Elkhorn is caring for the Sheldon family at this time.

The family of Laurence F Sheldon created this Life Tributes page to make it easy to share your memories.

Send flowers to the Sheldon family.