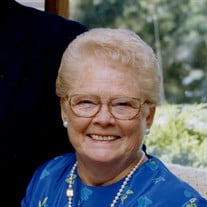 Memorials to Bethany Lutheran Church LaVonne Marion Wilson Moats was born on April 9, 1931 in Grand Island, Nebraska to Dale and Mollie (Ditter) Wilson. She grew up in Grand Island where she attended grade school and graduated from Grand Island High School in 1949. LaVonne went on to receive her Teaching Certificate from Kearney State Teachers College. In later years she would receive her Bachelor’s Degree in Education and then a Master’s Degree. LaVonne married LeRoy Moats on August 14, 1949 in Grand Island, Nebraska and they were blessed with six children: Kathleen, Karen, Katherine, Mark, Rex and Heather. LeRoy and LaVonne raised their family in Omaha until moving to Washington, Nebraska in 1976. LaVonne taught at a country school near North Platte, Nebraska before starting a family and becoming a stay-at-home mom. After her children were older, she went back to school twice to further her education. LaVonne taught at Sunnyside Country School, District 29, Omaha Public Schools as a substitute teacher, and Metro Community College, where she helped inmates at the County Correction Center obtain their GED’s. She enjoyed traveling, working in the garden, canning, baking and anything involving the family. She made 18 trips to Norway including the 1994 Winter Olympics in Lillehammer with her family. LaVonne was a leader and educator, always in command of a situation. She was loving, compassionate and a warrior for her children. LaVonne enjoyed board games, crosswords and puzzles of all kinds. She was an avid Chicago Bulls and Nebraska Cornhusker fan and enjoyed all football. She specialized in preparing comfort food and enjoyed dinner and a cold margarita at Hector’s. LaVonne passed away on Sunday, December 29, 2019 at Lakeside Hospital in Omaha, Nebraska at the age of 88 years, 8 months and 20 days. She was preceded in death by her parents Dale and Mollie, husband LeRoy, sister Arlene and twin grandsons Allan and LeeRoy Moats. LaVonne is survived by children Kathleen (Kent) Porter of Westfield, Indiana; Karen (Mike) Wilson of Dallas, Texas; Katherine Siller of Yuba City, California; Mark (Alane) of North Salt Lake City, Utah; Rex (Diane) of Elkhorn, Nebraska and Heather (Jim) Nagengast of Omaha, Nebraska; 6 grandchildren: Jill Pomeroy, Justin Moats, Ariel Moats, Jonathan Moats, Madeline Moats, Jasmine Moats, and 3 great grandchildren: Kerigan Pomeroy, Kellan Pomeroy, and Campbell Pomeroy

Memorials to Bethany Lutheran Church LaVonne Marion Wilson Moats was born on April 9, 1931 in Grand Island, Nebraska to Dale and Mollie (Ditter) Wilson. She grew up in Grand Island where she attended grade school and graduated from Grand Island... View Obituary & Service Information

The family of LaVonne Marion Moats created this Life Tributes page to make it easy to share your memories.