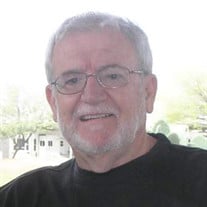 Lawrence Jerome Miller, age 82, died on Tuesday, April 14, 2020 at Bergan Mercy Hospital in Omaha, NE surrounded by his loving family. He was born the son of Virgil and Katherine Miller in North Platte, NE on January 21, 1938. He grew up in Wallace, NE where he received his education and graduated from Wallace High School. He was chosen to attend Cornhusker Boys’ State and received honors during his time there. He was on the basketball and football teams and enjoyed playing the saxophone in a band with his cousin Roger. On August 30, 1958, Larry was united in marriage to Janette J. McCormick at Saint Patrick’s Catholic Church in North Platte, NE, and to this union, three children were born: Brad Jerome, Joanne Elizabeth, and Jacqueline Renee. In 1959, he graduated from the University of Nebraska, Lincoln with a Bachelor degree in Mechanical Engineering. He had numerous work experiences. He built a lawnmower when he was 10 years old to mow lawns. He worked in the Wallace Lumber Yard while attending college. After college, he worked for Caterpillar Tractor Company for 40 years, and holds a patent on part of the design of one of their tractors. As a side business, he designed and made tomato stakes with partners. Dad loved the outdoors. He was a passionate landscaper. If he wasn’t inside working on a project, he was outside in his yard planting, pruning, trimming, re-planting, mulching, or mowing. It was one of his favorite things to do. He loved to travel and was always planning trips with Mom in their RV. He was an avid bicycler, and with Mom joined numerous bike clubs. He enjoyed working on computers. He could build, rebuild or fix any device. He had an amazing memory and could tell stories to the finest detail. Thank you, Dad, for all of the days you gave your family filled with smiles and warmed by love. You took wonderful care of your family. We are going to miss you every single day, Dad. He was preceded in death by his wife of 61 years Janette (McCormick) Miller and his parents, Virgil and Katherine (Langdon) Miller. Larry is survived by his son, Brad (Patricia) Miller of Vermont; daughters Joanne (Michael) Lake and Jacqueline Miller of Omaha, NE; grandchildren Kathryn (Nick) Cheney, Jennifer and Alyssa Miler; a great grandchild, Azalea Cheney; and sister, Ann (Roger) Webb of Surprise, AZ. The family has elected to have a private graveside service on Friday, April 17, 2020 at Prospect Hill Cemetery in Elkhorn. In lieu of flowers, people may wish to make a donation to the Cancer Research Institute (CRI) in memory of Larry Miller.

Lawrence Jerome Miller, age 82, died on Tuesday, April 14, 2020 at Bergan Mercy Hospital in Omaha, NE surrounded by his loving family. He was born the son of Virgil and Katherine Miller in North Platte, NE on January 21, 1938. He grew up in... View Obituary & Service Information

The family of Lawrence J. Miller created this Life Tributes page to make it easy to share your memories.