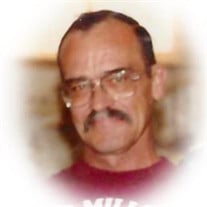 Lawrence William Miller Larry (Ace) was born May 13, 1939 in Council Bluffs, Iowa to William and Agnes (Melia) Miller. At the time of his birth, the Millers lived in Glenwood, Iowa until relocating to Valley, Nebraska when Larry was 3 years old. Being the youngest of 12 children, Larry was doted on by his older sisters and got into mischief with his older brothers. Larry grew up in Valley and graduated from Valley High School in 1957. Larry enlisted in the United States Army in December of 1959 and served 3 years, serving as an ambulance driver for one year in the Korean Conflict. In 1962 he left active duty and was in the Reserves until honorably discharged in December 1965. He met Carol in 1967 and they settled in Valley, Nebraska where they raised Larry Petersen and Lori Kile from Carol’s previous marriages, and in 1969, their third child, William was born. They lived in an area of Valley affectionately known as “Dog Patch,” moving from one house to another across the street and lived there for 50 years. In 2018, Larry and Carol relocated to Waterford at Roxbury Park Assisted Living Center in Omaha, Nebraska. Larry worked for Valmont Industries in Valley, Nebraska the majority of his adult life, retiring in 2002. As a maintenance technician, he was respected by his coworkers and known as the guy who could fix almost anything. He enjoyed listening to country music, tinkering in his garage, drinking PBR and being with his dogs Maddie, Snoopy and Pixie. He liked old Westerns on TV and read many Tom Clancy and Louis Lamour novels. Larry was a quiet man and was measured in his words, but would often surprise you with a funny comment out of left field. Larry passed away Sunday, September 6, 2020 after coping with COPD for many years. He was made comfortable with the wonderful assistance of Serene Care Hospice during August at Waterford at Roxbury Park Assisted Living Center in Omaha at the age of 81 years 3 months 24 days. He was preceded in death by: his parents, William and Agnes (Melia) Miller; three brothers, John, Charles and William Miller Jr.; six sisters, Coletta Oppliger, Agnes Ewing, Rita Langdon, Mary Jo Love, Eleanore Behrendt and Mary Genevieve Miller; and brothers-in-law, Marvin Oppliger, Don Langdon, Robert Serfass, Joe Love, Larry Ewing and Barney Behrendt, and granddaughter Ashley Frederick. Larry is survived by: his wife Carol of Omaha; children; Larry Petersen of Valley, Lori Kile of Omaha and William Miller (Gary Randall) of Omaha; grandchildren, Tanner (Courtney) and Trevor Petersen, Tony Weihe (Ashley), Ariel (Aaron), Alyssa and Austin Kile; great grandchildren Royce, Maeli, Ayla, Paige and Peyton; sister Marilyn Serfass of Bellevue, NE, and brother Frank Miller of Tucson, AZ, and many nieces and nephews. Memorial service will be held at 11 am, Saturday, September 12, 2020 at Reichmuth Funeral Home in Elkhorn with Rev. Mary Ann Calta officiating. Military honors will be rendered at the funeral home following the services. Visitation will take place on Friday from 5 pm till 7 pm at the Reichmuth Funeral Home in Elkhorn with the family present. Memorials can be made to the: Nebraska Humane Society and left or mailed to Carol at 5728 S 108th St, #214 Omaha, NE 68137 A lunch will be served following the services for family and friends at the funeral home.

Lawrence William Miller Larry (Ace) was born May 13, 1939 in Council Bluffs, Iowa to William and Agnes (Melia) Miller. At the time of his birth, the Millers lived in Glenwood, Iowa until relocating to Valley, Nebraska when Larry was 3 years... View Obituary & Service Information

The family of Larry "Ace" Miller created this Life Tributes page to make it easy to share your memories.