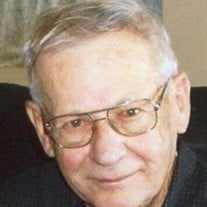 Leonard Pacas, Sr, age 88 of Yutan, NE died at his home surrounded by his loving family on Tuesday, May 26, 2020. He was born the son of Frank and Anna (Juva) Pacas on November 6, 1931 in Schuyler, NE. After High School, Leonard was drafted into the United States Army on May 1952 and fought in the Korean War. He went to Japan and Korea, and was overseas for 18 months, and two weeks. He received an Honorable discharge on May of 1954. He received a Marksmanship award, Bronze Service Star, Good Conduct Medal, National Defense Service Medal and a United Nations Service Medal. Around April of 1955, Joella Palmer first saw Leonard painting the Schuyler Bridge, and after she left a few notes on his car, they decided to meet shortly after at the café that Joella worked at. Leonard was 23 and Joella was 17. They dated about 3 months and were married that August of 1955 in North Bend, NE. Leonard was a butter maker and delivered cream around town. He made $55.00 a week, and so Joella had a budget of $10.00 for groceries for each week, if she had any extra, she would buy a tube of lipstick. They soon moved to Fremont to begin working at the Campbell’s Soup Factory. In 1957, their first child was born, Leonard, Jr. and then in 1959, he began working at Western Electric in Omaha, and later that year, their second son, Brian was born in December. The family would move to Yutan in 1961 and he would retire due to his health in 1980. Leonard was a Man of few words but when he knew you, he couldn't stop talking. He loved going fishing, hunting as well as going boating and camping. We have so many great memories with raising the boys and doing a lot of things with them. Our greatest event was when He celebrated his 60th anniversary at the Yutan Country Club with all his family and Friends attending. He loved to dance to polka music. He so loved his time with his Grandchildren and Great Grandchildren. He taught his sons all about hunting bull frogs, snapping turtles, which he would have a turtle feed with his friends. Designed his own Airboat in 1963. He got the plans from Larry Buck, started building in a small shed, when finished had to cut the front of shed to get the boat out. His favorite time was going to Elwood lake fishing for walleyes as this was an annual event for many years. He was preceded in death by his parents; son, Brian Gene Pacas in September of 1980; and a grandson, Shane Richards in March of 2019. Leonard is survived by his wife, Joella (Palmer) Pacas of Yutan; son, Leonard, Jr (Kelly) of Arlington, NE; grandchildren: Lisa Marie (Tome) Buckethal of Johnstown, CO, and Karley Ann Pacas of Yutan; five great grandchildren; and a sister, Mary Ann (Charles) Muhle of Schuyler, NE; also many nieces, nephews and friends Funeral services will be held at 10 am, Saturday, May 30, 2020 at St. Peter’s United Church of Christ in Yutan with full military honors to follow at the church. The family request that you dress casually. Burial will take place at 2 pm, Saturday graveside at the Schuyler Cemetery in Schuyler, NE. Visitation will also be held at the St. Peter’s United Church of Christ in Yutan on Friday, May 29, 2020 from 5 pm until 7 pm with the family present. Memorials can be made in liu of flowers to either the Yutan Fire and Rescue Squad or VNA Hospice and left or mailed to the Reichmuth Funeral Home at P.O. Box 67 – Elkhorn, NE 68022

Leonard Pacas, Sr, age 88 of Yutan, NE died at his home surrounded by his loving family on Tuesday, May 26, 2020. He was born the son of Frank and Anna (Juva) Pacas on November 6, 1931 in Schuyler, NE. After High School, Leonard was drafted... View Obituary & Service Information

The family has asked if your planning on attending the service, please dress casually.

Send flowers to the Pacas family.