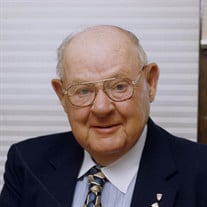 Memorials to Bethany Lutheran Church or Masonic Organization of Choice. LeRoy Moats was born on March 30, 1930 on a farm near Norman, Nebraska to Lee W. and Marie (Mjeldhein) Moats. He grew up in the Hastings/Grand Island area and he graduated from Grand Island High School in 1948. As a young boy, LeRoy enjoyed playing marbles and baseball. LeRoy married LaVonne Wilson on August 14, 1949 in Grand Island, Nebraska and they were blessed with six children: Kathleen, Karen, Katherine, Mark, Rex and Heather. LeRoy and LaVonne raised their family in Omaha until moving to Washington, Nebraska in 1976. LeRoy worked as a bus driver for Greyhound from 1952 to 1990, during which time he received the Silver ScenicCruiser award for 25 consecutive years of accident free driving and over-the-road truck driver for the Tie Yard from 1990 to 2001. He enjoyed gardening, woodworking, playing cards, reading, bird watching, traveling, and fishing. LeRoy was a dedicated Mason, with memberships in the John J. Mercer Lodge #290 AF & AM of Omaha, Nebraska and Waterloo Lodge #102 AF & AM of Elkhorn, Nebraska; Tangier Shrine; York Rite; Sons of Norway and the Amalgamated Transit Union where he served as Secretary/Treasurer. He served as Grand Tyler with Grand Lodge of Nebraska during 2012-2013, participating in many Cornerstone Ceremonies. LeRoy was a strong, honest, dedicated man with a great sense of humor. He was a planner, strategic thinker and a great poker player. Family events were at the forefront of his life: marriage, births of children, providing for his growing family and trips back to Norway to rediscover his roots. The family enjoyed annual road trips, visiting a majority of the 50 states over a ten-year period. LeRoy enjoyed Johnny Cash, working around his home and splitting wood. He savored homemade Oatmeal Raisin cookies, a hot cup of coffee and dinner out at Bohemian Café or Cascio’s. LeRoy was an avid Husker football fan which he shared with his children. He was a man of many sayings: “100 years from now you will never know it.” “That will send you home talking to yourself.” “Play the hand you’re dealt.” “Time is a great equalizer.” “It only cost a few more pennies to go first class.” “Old age isn’t what it’s cracked up to be.” “Drive in advance.” “There are two sides to every story, and the truth is usually in the middle.” LeRoy will be remembered as a kind, compassionate family man, hard worker, dirt poor to start. He cherished 70 years of marriage and raised six successful children. LeRoy passed away on June 28, 2019 at his home in Washington, Nebraska surrounded by his loving family at the age of 89 years, 2 months and 29 days. He was preceded in death by his parents Lee and Marie, half-sister Hazel Miller, son-in-law Neal Siller, sister-in-law Arlene Feyen and twin grandsons Allan and LeeRoy Moats. LeRoy is survived by his wife LaVonne in their 70th year of marriage; children: Kathleen (Kent) Porter of Westfield, IN, Karen (Mike) Wilson of Dallas, TX, Katherine Siller of Yuba City, CA, Mark (Alane) of North Salt Lake City, UT, Rex (Diane) of Elkhorn, NE and Heather Jansen (Jim Nagengast) of Omaha, NE; sister Lucille Benker of Pekin, IL; and 6 grandchildren and 3 great grandchildren.

Memorials to Bethany Lutheran Church or Masonic Organization of Choice. LeRoy Moats was born on March 30, 1930 on a farm near Norman, Nebraska to Lee W. and Marie (Mjeldhein) Moats. He grew up in the Hastings/Grand Island area and he graduated... View Obituary & Service Information

The family of LeRoy Moats created this Life Tributes page to make it easy to share your memories.

Send flowers to the Moats family.