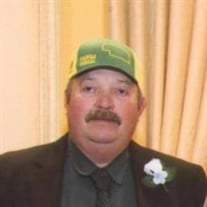 Les Dyer was born on July 25, 1955, the youngest of three children born to John and Louise (Soll) Dyer. He initially attended elementary school in a one room schoolhouse, “J3”, just up the road from the farm. Les finished elementary at Gretna and went on the graduate from Gretna High School in 1973. Les had very early memories of working on the farm with his parents and siblings. With his brother Larry, they formed Dyer Bros. and continued farming not only the Dyer family farm but also for the Sumnick family. Les would be proud to pass the farm legacy to the 6th generation of Dyer’s, his son, John, who will continue to farm alongside Larry. Les was a skilled mechanic and along with a few buddies, worked as a pit crew member for a dirt track race car. In 1983 Les met Stella Tomczak through mutual friends. Les knew he was going to marry Stella from their initial meeting, but she needed a bit more convincing. On May 3, 1985, Les and Stella married in St. Patrick’s Catholic Church in Gretna, Nebraska. Les soon adopted Adam and Melissa as his own children. A few short years later, John was born and 13 months later, Loren was born. Les took pride in building the family’s home on the Dyer Farm in 1994 after assuring Stella it would be built a year after they married. Stella made sure to remind everyone that it took ten years to come to fruition. Les focused on farming and raising his family. He was a voracious reader, animal lover, and food connoisseur. In 2004, he became a grandpa to Amelia, then in 2013 to Silas, and most recently to River in 2021. Les certainly had a soft spot for his granddaughters while Silas was Grandma’s boy. Les Dyer was tenacious and lived his life the way he wanted. He passed away on Sunday, June 13, 2021, on the family farm in Waterloo, Nebraska. He was preceded in death by his parents John & Louise Dyer. Les is survived by his wife Stella of Waterloo, children; Adam & Jenae Dyer of Waterloo, Melissa & Garrett Wooten of Yutan, NE, John & Audrey Dyer of Waterloo, and Loren Dyer of Waterloo, grandchildren; Amelia, Silas, and River, brother Larry Dyer of Waterloo, and sister Linda & Steven Guy of Central City, NE, and his beloved dog, Bubba. A visitation gathering will be held Friday from 5-8 PM with a time of sharing to take place at 7 PM at the funeral home in Elkhorn. Private inurnment at Elkhorn Cemetery. In lieu of flowers, memorials to the Waterloo Fire and Rescue Squad.

Les Dyer was born on July 25, 1955, the youngest of three children born to John and Louise (Soll) Dyer. He initially attended elementary school in a one room schoolhouse, &#8220;J3&#8221;, just up the road from the farm. Les finished elementary... View Obituary & Service Information

The family of Les E. Dyer created this Life Tributes page to make it easy to share your memories.

Send flowers to the Dyer family.