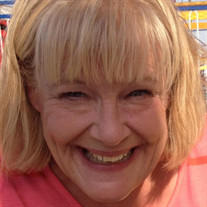 In lieu of flowers, memorials to the family for later designation. Private family service will be held Thursday 11 AM with live streaming for the public. (https://webcasts.lifetributes.com/1101486). Lisa Marie Harter was born on April 1, 1957 in Orange, New Jersey to William and Rita (Hornberger) Golden. She grew up in Omaha, graduating from Millard High School in 1975. Lisa went on to attend Clarkson School of Nursing, receiving her BSN. As a young girl, Lisa enjoyed spending time with her siblings. Lisa married Gary Harter on September 12, 1980 in Omaha, Nebraska and they were blessed with three sons: Jeff, Steve and Mike. Lisa and Gary raised their family in Waterloo. Lisa worked as a nurse and Medicare Claims investigator and at Rob-See-Co in many positions. She enjoyed collecting knick knacks, raising her Golden Retrievers, cake decorating, singing and dancing. Lisa was a member of the Waterloo Volunteer Fire Department as an EMT and firefighter. She was a great mix of attributes, loving, caring, stubborn, hard-headed and strong. Lisa would do anything for her family but would also tell you how she felt about something. She enjoyed Beatles music and savored prime rib, a cold diet pepsi and dinner out at Farmer Brown’s . Her family will remember her as the “Best Mom/Grandma ever”. She loved her boys so much and her grandchildren was her greatest gift. Lisa passed away suddenly on November 12, 2020 at Lakeside Hospital in Omaha, Nebraska at the age of 63 years, 7 months and 11 days. She was preceded in death by her parents Bill and Rita, husband Gary and brother John. Lisa is survived by sons and daughters-in-law Jeff and Amber, Steven and Aurora and Michael all of Omaha; 4 grandchildren, Brylee, Sloane, Garrison and Jameson; sisters Jan McKeever of Omaha and Debbie Golden of Heyworth, IL;

In lieu of flowers, memorials to the family for later designation. Private family service will be held Thursday 11 AM with live streaming for the public. (https://webcasts.lifetributes.com/1101486). Lisa Marie Harter was born on April 1,... View Obituary & Service Information

The family of Lisa Marie Harter created this Life Tributes page to make it easy to share your memories.

In lieu of flowers, memorials to the family for later designation....

Send flowers to the Harter family.