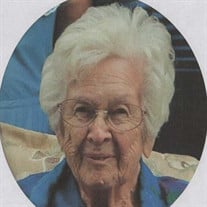 Lois Mae Bogerd Engstrom was born to Ida and Edward Bogerd on September 6, 1928 in Grand Rapids, Mi. She spent her younger years with her three brothers and two sisters. She graduated from Union High School in Grand Rapids. Her first jobs included ironing hankies and working in a dime store. Because Lois worked, she would pay her siblings to do her chores at home. Lois and her siblings attended many dances on the weekend. At one of these dances she met the love of her life, Don Engstrom. He was fresh out of the service. They married on March 15, 1945. Over ten years they added four children to their family: Dan, Michael, Royce, and Suzy (Diane). Lois spent many weekends camping with other family members and their children at the lakes of Michigan. In 1957 the family moved to Omaha. They were one of the only people from both their families to move from Michigan. The Michigan family just knew they would run across cowboys and Indians! Lois was truly happy being a homemaker. She enjoyed being with her friends and several of them volunteered at Benson West School during the lunch hour and then spent most of the afternoon drinking coffee with those friends. However, her family always came first, often in the form of peanut butter cookies after school, or trips to the library to make sure her kids learned to read. She also spent her time involved in Welcome Wagon, church activities, making hats, doing ceramics, sewing, and knitting. Once the children were grown, they moved to the lake house in Waterloo. Lois worked at a number of jobs over the years, and she worked closely with Don when they started their own business around trailer sales and service. Together, they took the bold step of selling their house to start the business. Because of their hard work, the business thrived and it wasn't long before they bought back their beloved lake house. Lois loved the water and the family enjoyed many holidays, birthdays, and summer days at the lake. Being from Michigan, Lois loved winters there also. Lois continued to live at the lake house until she passed. There are so many memories from time spent at the lake. In retirement Lois and Don enjoyed traveling in their RV going, back to Michigan, cruises and Navy reunions. As the years went on they settled in Apache Junction, Arizona for the winter. The people there became their second family. After Don’s passing, Lois continued being a snowbird. She wintered in Arizona for 28 years. She had such a great year there last year. Throughout Lois’ life her family and friends were very important to her. She loved spending time with her kids, 9 grandchildren, 8 great grandchildren and great, great grandson. Her grandchildren would often call just to chat with her. She loved hearing about their families and their lives. This is a great testimony to how well she was loved by her family. Lois had many treasured friends over the years and she enjoyed hearing about their families as well. Lois M. Engstrom, age 91 of Waterloo, NE, died September 7, 2019. Preceded in death by husband Donald, 3 brothers and one sister. Survived by sons and daughters-in-law Daniel & Ann of Papillion, Michael & Kathleen of Arizona, and Royce & Mary of Montana, daughter and son-in-law Suzy & Bill Parsons of Bennington, 9 grandchildren: Amy Dunham, Craig Engstrom, Brendan Keenan, Michael Engstrom, Iris Gregg, Tyler Engstrom, Carey Wheelhouse, Tony Parsons, and Jessie Rinke, 8 great grandchildren and one great great grandson, sister and brother-in-law Lorraine & Wayne Scott of Michigan, many nieces and nephews, and many friends in Arizona.

Lois Mae Bogerd Engstrom was born to Ida and Edward Bogerd on September 6, 1928 in Grand Rapids, Mi. She spent her younger years with her three brothers and two sisters. She graduated from Union High School in Grand Rapids. Her first jobs included... View Obituary & Service Information

The family of Lois Mae Engstrom created this Life Tributes page to make it easy to share your memories.

Lois Mae Bogerd Engstrom was born to Ida and Edward Bogerd on...

Send flowers to the Engstrom family.