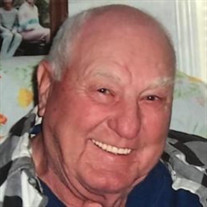 Lowell Ladelle Bray was born on May 28th, 1926 to John and Susie (Crist) Bray of Arcadia, NE. He was the youngest of 10 children and was raised on a farm. The boys were expected to tend to the farm animals, including pigs, chicken and cows. Milking all the cows was also expected before leaving for school each morning. Each week they brought their eggs and cream to town to be sold for grocery money for their mother, Susie. Lowell and his siblings weren’t very close to their father as he was a stern and demanding of them and their mother. Lowell adored his mother. He also had a very close relationship with his brother Leo. Growing up, Lowell had a love for fishing, hunting and sports. He always told his own kids that he wanted to be sure to introduce these hobbies to them to help “keep them out of trouble.” Many of these fishing memories where made up at Sherman Reservoir with friends but mostly family. Lowell’s love of fishing rubbed off on most of his children. He and Leo always found the time for an annual pheasant hunting trip (35-40 years). They also enjoyed ice fishing together. Lowell married Dorothy Moody on September 23, 1950. They had met on a blind date some years before. Along with two friends, they traveled to South Dakota to elope, and drove through the night to get back because Lowell had a baseball game the next day. Upon their return, Lowell’s mother insisted that they sleep separately, despite being married. They were married for 66 years until Dorothy’s death in 2016. Lowell and Dorothy had five children: Shari, Dan, Joni, Bob and Barb. Lowell was always quick to point out that he had “the best family in the world.” He spent the last 30 years of his working career as an agent for State Farm Insurance in Millard. Prior to that, he served as a door to door milk man in North Omaha for Roberts Dairy. Early in their marriage, he and Dorothy both worked in the ordnance plant near Grand Island. Lowell was also an avid sports fan. He occasionally coached baseball and softball teams that his kids were a part of, and during that time became well known by calling out “Ducks on the Pond!” from the dugout or stands, whenever the bases were loaded. Throughout his life, he never missed an opportunity to attend his grandkids’ games and activities. Lowell was proud to have served in the Navy in the Pacific during World War II. Later in life, he admitted that he had lied about his age to be able to enlist early to serve his country. He would often share stories of being on a ship in the Pacific that served as an escort for a destroyer. One such story told of being a part of the fleet assembling for the inevitable invasion of mainland Japan. During preparation, a rumor started running from ship to ship about “some really big bomb” that had been developed. Not long after that, an atomic bomb was dropped on Hiroshima, and a few days later Nagasaki, bringing the war to an end. Those who knew Lowell well, lovingly recall seeing him in his garden, dressed in his Dickies coveralls, and a front pocket full of pens and eyeglasses. He always planted an extremely large garden and did so because he loved to share with friends, relatives, and neighbors. Lowell passed away on Sunday, March 8th at St Luke’s Hospital in Sioux City, Nebraska at the age of 93 years old. He was proceeded in death by his parents John and Susie Crist. He is survived by his children: Shari Kusek of South Sioux City, Danny and Deanna Bray of Fremont, Joni Pierce of Papillion, Robert Bray of Nashville, TN, and Pat and Barb McCauley of Hastings; along with Fifteen grandchildren, sixteen great grandchildren and Four great-great grandchildren. A memorial can be made to the American Legion Post in Valley, NE and can be mailed or left at the funeral home.

Lowell Ladelle Bray was born on May 28th, 1926 to John and Susie (Crist) Bray of Arcadia, NE. He was the youngest of 10 children and was raised on a farm. The boys were expected to tend to the farm animals, including pigs, chicken and cows.... View Obituary & Service Information

The family of Lowell L Bray created this Life Tributes page to make it easy to share your memories.

Send flowers to the Bray family.