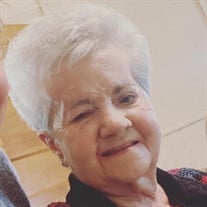 Margie was born on December 3, 1938 in Oxford, Nebraska to Harold Taylor and Margaret (Sickels) Taylor. Her family later moved to Benson where she grew up, graduating as a Benson Bunny in 1957. After graduation, she began work as a stenographer for Mutual of Omaha. In 1963 she had a good friend who lived two houses down from her, Johann’s sister. He was there every Sunday and when Margie would come by, he would hide behind a newspaper (it was sometimes upside down because he hadn’t learned to read English yet). After a while, Johann asked his sister if she thought Margie would go out with him and she encouraged him to ask her. When Johann called and asked, Margie said, “no”. Luckily before he hung up the phone, he noticed she was still talking and picked the phone back up. She explained that she was going out of town, but would be happy to go out with him the following week. On April 13, 1964, Margie and Johann were married at Fort McClellan, AL, with two soldiers as their witnesses. After their wedding, the Army sent Johann to Korea and Margie returned to Nebraska. Although they got onto separate flights, they both had a layover in Texas and Johann was able to surprise Margie at the airport during their layovers. Johann wrote Margie a letter every day until he returned a year later. Upon his discharge from the Army, Johann began a business, Langmaack Construction, and Margie worked as his secretary. On the weekends, Margie and Johann would go out to eat together, and El Bees and buffets were Margie’s favorite. They would also go dancing at Peony Park, and Margie particularly enjoyed Polka music. She also enjoyed going for walks, reading, keeping track of the weather and the stock market, watching game shows like The Price is Right and Steve Harvey, and shopping for new clothes and jewelry. Margie liked to keep her hair looking nice; no one was allowed to touch it. She went to the hair salon every Friday and would not let anything stop her from getting there. Margie had a big sweet tooth and loved all desserts, especially ice cream. She drank coffee often, but her cup really had more sweetener than coffee in it, and it had to be warmed up in the microwave multiple times to keep it hot enough for her. The birth of her daughter, grandsons, and great-grandchildren were all special milestones in Margie’s life. She was also thrilled to be able to attend her grandsons’ weddings. Family was important to Margie and she spent as much time with them as possible. Margie was very loving, but could also be feisty, and if someone was misbehaving, she would scold them by saying, “You’re going to Hell in a handbasket.” Not picking up after yourself, or sitting on her good furniture, were both sure ways to get you in trouble with Margie. She was very tidy and organized and did not like people leaving a mess in her house. Terri has fond memories from when she was growing up of jumping rope with Margie, an activity they loved to do together. Margie’s grandchildren remember that once they were old enough to use the phone, they would secretly call their grandma and ask her to call their mom and tell her to bring them over; they loved spending time with their grandma. The whole family will remember the wonderful trips they took together fishing and camping. Johann remembers that each year on Sweethearts Day he would buy Margie a dozen red roses and chocolates and she would tell him he shouldn’t spend so much money and then would share the chocolates with him. She would also write him sweet notes and sign them “Your Leibling” (German for “your sweetheart”). Margie’s family will remember her as a classy woman who loved them all dearly. Margie was preceded in death by her parents, Harold and Margaret Taylor and her sister, Mary Ann Langmaack. She is survived by husband of 57 years, Johann Langmaack; daughter, Terri (Brad) Gralheer; grandchildren, Brandon (Kristina) Gralheer and Chris (Amber) Gralheer; great-grandchildren: Lincoln, Lennon, Blakely, Cooper, Braxton, and Reilly Gralheer; brothers, Harold (Martina) Taylor and Gerald (Marsha) Taylor; and many nieces and nephews Memorials may be directed to the family for later designation to Alzheimer's Research

Margie was born on December 3, 1938 in Oxford, Nebraska to Harold Taylor and Margaret (Sickels) Taylor. Her family later moved to Benson where she grew up, graduating as a Benson Bunny in 1957. After graduation, she began work as a stenographer... View Obituary & Service Information

The family of Margie Lea Langmaack created this Life Tributes page to make it easy to share your memories.

Send flowers to the Langmaack family.