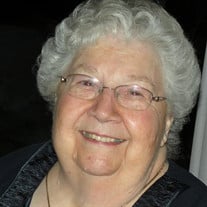 Marian Klabunde Thompson Paasch was born on January 4, 1931, in the hospital elevator in Omaha, NE to August and Lena Klabunde. She was baptized in 1931 at Benson Immanuel Church and confirmed in 1945 at St. Paul’s Church in Millard. She attended schools in Valley, Irvington, Elkhorn, and Millard, before graduating from Valley high school in 1947. At age 16, Marian attended Midland College for one summer. She taught at a Gretna country school that fall. After another summer of college, she started teaching at District 41 School, taught there for four years, and substitute taught occasionally. A cute boy named Roy lived next to the school and would come to see her after school. They loved dancing at Millrose Ballroom. Marian and Roy were married on August 18, 1951, at Bethany Lutheran Church in Elkhorn. They lived with Roy’s mother Anna and his sister Ella during their first year of marriage. Their marriage was blessed with five children: David, Daniel, Frank, Teresa, and Calvin. Roy and Marian were married 60 years. When Marian was 9 years of age, she got a milk stool and bucket and learned to milk cows. This prepared her to become a farm wife, where she milked cows with Roy. They worked together as partners on the farm. She also drove a tractor for baling, raking, and discing. Marian was the farm's bookkeeper, gardener, cook, and mother. Marian was a 4-H leader for 25 years, encouraging local kids to participate in judging, demonstrating, and exhibiting at the fair. She held all leadership positions and was a 60-year member of the Extension Club. League bowling and pinochle with lifelong friends provided entertainment and fellowship. In 1988, she volunteered with the Literacy Council teaching adults to read. She loved playing cards and taught her grandkids to play Kings in the Corners. Rummikub afternoons with the ladies were treasured. Bethany Lutheran Church was a significant part of Marian's whole life. The Wednesday Bible Study group she led was like family, supporting each other through life's experiences. She taught Sunday School and Bible School every year while her kids were growing up. She actively participated in Circle, Metro East, Women of the Church, and Quilting. Marian sewed hundreds of quilts with the church mission, numerous wall hangings, and special "big bed" quilts for her eight grandchildren. Left to cherish Marian’s memory are her children, Frank Paasch (Denise) of Omaha, NE; Teresa De Graaf (George) of Waukee, IA and their children Daniel, Melissa (Benjamin), Stephanie, and Nathan; and Calvin Paasch (Ann) of Valley, NE and their children Ellen (Mitch), Ethan, Lauren, and Logan, and great-grandson James, and siblings Erwin (Elaine) Klabunde and Donald (Delores) Thompson. Marian died peacefully at her home in Elkhorn on September 27, 2019. In death Marian rejoins her husband Roy, their two sons David and Daniel, her sister Mabel, and her parents August and Lena. Memorials can be made to Bethany Lutheran Church or the Bess Johnson Library.

Marian Klabunde Thompson Paasch was born on January 4, 1931, in the hospital elevator in Omaha, NE to August and Lena Klabunde. She was baptized in 1931 at Benson Immanuel Church and confirmed in 1945 at St. Paul&#8217;s Church in Millard.... View Obituary & Service Information

The family of Marian Paasch created this Life Tributes page to make it easy to share your memories.

Send flowers to the Paasch family.