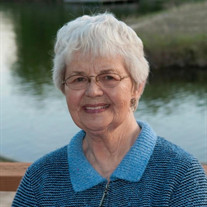 Live stream of the private family funeral service is available on Monday at 2 PM at https://webcasts.lifetributes.com/1111797 Survived by Roger Peters husband, David eldest son, Mark youngest son and daughter-in-law Judy, Mark's son Andy Peters, Mark's daughter Bekki Larrick with her daughters Madi, Ansley, son Nolan and Mark's daughter Libbi Peterson with her daughters Linnea and Willa. Virginia was born and raised in North Omaha. She graduated from North High School in 1945. She then had various office and secretarial jobs in Omaha. She was working for Dr. Calvin Davis at Aguila Court in downtown Omaha when she met her future husband Roger Peters at 1st Covenant Church in Omaha. They were married in Sept 1949 at the same church. They began their married life in the Shenandoah area in a farm house east of town. Roger was working at KMA as a transmitter engineer. They had their first son David on Sept 1, 1950. Then in 1952 they moved into Shenandoah and Virginia was stricken with polio and ended up with a paralyzed throat that was a problem for her the rest of her life. Another problem was her son David had cerebral palsy and she helped with the therapy and doctor visits. In April 1953 Virginia, Roger and Dave moved up to Omaha - first to South Omaha and then in 1955 to North Omaha on North 47th Ave. This was a Suburb of Veterans houses built under the GI Bill. In 1956 Virginia had her 2nd son Mark. Virginia had a post war suburban life raising her sons. They went to school at Waconda Central Park and North High. Virginia became a Christian when she was a teenager and was involved in Christian education in the Baptist Church where she was at the time. Virginia and Roger did team teaching with many Sunday School and youth groups. Besides being a house wife and Sunday School Teacher she also liked knitting, sewing, reading and cooking special occasion dinners. In 1971 The Peters family decided to build a lake home at Ginger Cove. Virginia was very adaptable and learned many construction skills while working with the Peters team. In 1978 Virginia traveled to England with her mother and was there for two weeks. She told stories of this trip for the rest of her life. We also went into Valley and joined the Baptist Presbyterian church and Virginia was back into Sunday school teaching and youth groups. She also commuted to Omaha to work at 1st Presbyterian Church and Lutheran Home as secretary. Virginia and her family spent 40 years at Ginger Cove. Swimming, sailboats, canoes, pedal boats, walks and bicycle rides. At Ginger Cove, Virginia was also in a Bible Study group and also went to Vince and Marian Peterson's (old Covenant Church friends) for dinners and fellowship. Also while there, son Mark graduated from high school and David graduated from Kennedy College. In 2012, we downsized and moved to a little cottage on the "wrong side of the tracks" in Valley. Most everything we needed was within walking distance. Still at her church and Virginia loved small town living. Virginia had hip replacement and knee replacement and began a gradual decline in physical strength. She also had short and long term memory loss. Then on January 5th she passed on to Jesus. We will miss her and remember the love and joy she brought us. - Husband Roger

The family of Marilyn Virginia Peters created this Life Tributes page to make it easy to share your memories.

Live stream of the private family funeral service is available...