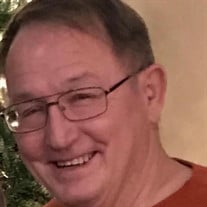 Mark Lynn Stanley was born on December 16, 1950 in Decatur, Illinois to Gerald and Loretta (Fleming) Stanley. He attended St. Thomas grade school and graduated from MacArthur High School in 1968 before enrolling in the University of Illinois. As a young boy, Mark enjoyed football, wrestling and spending time with his siblings. Mark worked as a truck driver for Rudolph Express and at O’Reilly Auto Parts. He enjoyed cars, woodworking, watching sports, and solving sudoku puzzles but his greatest joy came from being a dad and grandpa. He was active with his children, coaching their sports, daddy daughter dates, sleepovers with grandpa and playing pitch. Mark was hard-working, dependable, wise, generous and a joy to be around. He was a proud member of the Teamsters Union, an avid Cardinal and Chiefs fan and savored homemade lasagna, a cold diet Pepsi and dinner out at Good Life. He could often be heard sharing his wisdom “ Doing your best is different from being the best”. Mark will be remembered for his love of Jesus and his family, with all his heart. Mark passed away on December 24, 2020 at his home in Elkhorn. He was preceded in death by his parents Gerald and Loretta and sister Carol Groves. Mark is survived by Son Brent (Diana) of Omaha; daughter Tressa Rosone of Omaha; grandchildren, Blake, Brady, Bria and Bryant Stanley and Clayton and Carly Rosone; Fiancee Christine Smith of Grain Valley, MO; Siblings Gerry of Decatur, IL, Galen of St. Charles, MO and Debra Buxton of Decatur, IL.

Mark Lynn Stanley was born on December 16, 1950 in Decatur, Illinois to Gerald and Loretta (Fleming) Stanley. He attended St. Thomas grade school and graduated from MacArthur High School in 1968 before enrolling in the University of Illinois.... View Obituary & Service Information

The family of Mark Lynn Stanley created this Life Tributes page to make it easy to share your memories.

Send flowers to the Stanley family.