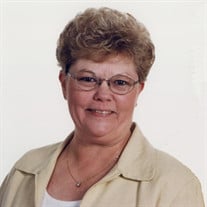 Marlene Janice (Schmidt) Smith was born November 11, 1943 in Omaha, Nebraska to Arnold and Irene (Voss) Schmidt. She was baptized and confirmed at St. John’s Lutheran Church in Bennington, Nebraska. Marlene grew up on the family dairy farm west of Bennington, where she developed a love for animals (except for chickens!). Her favorite color was blue, and she loved pansies and hollyhocks. Marlene went to school in Bennington, where she was a cheerleader and played volleyball. She was also crowned athletic queen! After high school, she worked at Boystown in the donor office, and then at Guarantee Mutual as a clerk. Marlene married Michael Smith June 1, 1963 at St. John’s Lutheran in Bennington, and they were blessed with two children; Jeff and Michelle. They lived in Irvington and Bennington before buying their farm in Washington County in 1973. Together they milked cows and farmed. Marlene could be found most often in the milking parlor, where she didn’t like any music or radio playing. Her favorite cows would give her a kiss on the cheek before leaving the barn. When you asked her why she didn’t drive a tractor, she would tell you, because she was smart! The farm always had an abundance of cats, which all the grandkids enjoyed. She also cleaned houses for over 15 years, and became close friends with everyone she cleaned for. Marlene loved to watch her kids play sports, show cows, and travel with friends to nearby towns. She felt so proud to be able to cheer on her grandkids in sports and attended every event. Marlene was also an avid Husker Volleyball fan. Marlene had a giving heart and quick wit. She loved sharing laughs with her friends and neighbors. Her favorite restaurants were Farmer Brown’s and the Alpine Inn. Family gatherings and playing cards at the farm are the most cherished memories. She is known for her fried chicken, meatloaf and chili, but spaghetti was always a side dish in her house. She always made her grandkids favorites: Grandma Vada’s mac and cheese, and Grandma Irene’s prime rib, but she never got the hang of making rice crispy bars! Marlene was a treasured wife, mother, grandmother, sister, and aunt, and we are privileged to have her love us! Marlene died on Tuesday, September 21, 2021 at CHI Bergan Mercy Hospital in Omaha, Nebraska at the age of 77 years, 9 months, and 10 days. She was preceded in death by her parents Arnold & Irene Schmidt. Marlene is survived by her husband Mike of Blair, son Jeff & Krisa Smith of Bennington, daughter Michelle Jacobs of Omaha, grandchildren; Jake, Reagan, Emily, and Reese, brothers & sisters-in-law Sonny & Nancy Schmidt of Omaha, Jerry & Betty Schmidt of Omaha, and Roger & Kelly Schmidt of Palm Coast, FL, and a host of nieces, nephews, and friends.

Marlene Janice (Schmidt) Smith was born November 11, 1943 in Omaha, Nebraska to Arnold and Irene (Voss) Schmidt. She was baptized and confirmed at St. John&#8217;s Lutheran Church in Bennington, Nebraska. Marlene grew up on the family dairy... View Obituary & Service Information

The family of Marlene Janice Smith created this Life Tributes page to make it easy to share your memories.