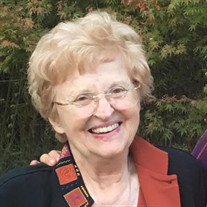 Marlene Eleta Thomas passed away December 30, 2020, from complications of COVID-19. Although her last address was in Salinas, California, she always considered herself to be a farmer from Nebraska. Born to Oscar and Mary Schulz in Omaha, Nebraska, May 5, 1934, she was raised on a farm and became the wife of a farmer Donald P. Thomas (1929-1978). She graduated with honors as valedictorian from Yutan High School in 1951. Marlene became an expert seamstress and dressmaker and spent many years as a 4-H leader for young, female 4-H members. She was delighted when her family was selected as Farm Family of the Week with Arnold Peterson on WOW-TV in Omaha. Following the death of her husband, Marlene continued to live on the family farm with her younger son Michael P. Thomas who both ran and managed the farm while attending college. Marlene watched with great happiness as Michael and his family took the farm to new levels of success and was thrilled when Michael’s son Brauk joined the farming enterprise. Marlene was a proud member of the Daughters of the American Revolution (NSDAR) and treasured history especially as it pertained to the family’s connection to both Meriwether Lewis and William Clark and their expedition. The Joslyn Art Museum and Omaha’s Henry Doorly Zoo and Aquarium were favorite haunts of hers as she was passionate about taking pictures of flowers, birds, and family; the grandchildren coined the phrase “picture taking grandma” as her official title. Traveling was also important to her as she took her twin brothers Alton and Arleigh along to Aksarben and to see the world or as she traveled with the Hlavaceks to exotic places. She moved from Nebraska to Salinas, California, in 2018 and resided in the assisted living facility Sunrise Villa Salinas with her daughter Monica and son-in-law James Hlavacek living nearby. Marlene evolved into quite the social butterfly in California and frequently joined the Hlavaceks on fun social outings. Marlene was an adventurous soul who lived life to its fullest and will be sorely missed. Predeceasing her were her parents Mary and Oscar Schulz, Donald Thomas (spouse), brothers Alton and Arleigh Schulz, and granddaughter Martina Hlavacek. She is survived by her brother Harold Schulz (Carol); her four children and their spouses David Thomas (Julie), Rhonda Urdang (Bruce), Monica Hlavacek (James), and Michael Thomas (Tychia); thirteen grandchildren; and ten great-grandchildren. Burial will be Nebraska. Because of the Covid virus, the ceremony will be limited to local family. Donations in Marlene’s memory may be directed to St. John’s Lutheran Church in Yutan, Nebraska, or Mee Memorial Hospital in King City, California.

Marlene Eleta Thomas passed away December 30, 2020, from complications of COVID-19. Although her last address was in Salinas, California, she always considered herself to be a farmer from Nebraska. Born to Oscar and Mary Schulz in Omaha, Nebraska,... View Obituary & Service Information

The family of Marlene Eleta Thomas created this Life Tributes page to make it easy to share your memories.

Send flowers to the Thomas family.