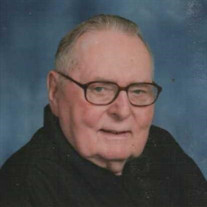 Memorials to Zion Lutheran Church or Bennington American Legion Post #266 Marlin Robert Cohrs was born on September 19, 1928 on a farm east of Bennington to Herbert and Alma (Schneekloth) Cohrs. He grew up in rural Bennington where he attended country school and graduated from Bennington High School in 1944. As a young boy, Marlin was baptized and confirmed at Zion Lutheran Church. He played basketball and baseball, but most of his time was spent helping the family with farm work. Marlin married Norma Buel on March 18, 1950 at Zion Lutheran Church and they were blessed with seven children: Rod, Sandy, Janice, Gary, Patty, Diane and Kathy. Marlin and Norma lived in Bennington, San Diego and Omaha before returning to Bennington for good in 1963. Marlin worked for a transport company, farmed and took side jobs as a mechanic until he was drafted into the United States Marine Corp in 1951. After his tour with the Marines, Marlin returned home and went to work for Metropolitan Utilities District in Omaha until his retirement in 1990. Marlin was a hard-working man, always working one or two part-time jobs to help support his growing family. He enjoyed racing stock cars, playing cards, dancing, gardening and taking the family to Minnesota for fishing trips. Marlin was a lifelong member at Zion Lutheran Church. He treasured the time he could spend with his family, sharing his knowledge and always teaching. When driving by Marlin’s house on Sunday, you would notice a driveway full of cars as the entire family would gather together to play cards. Marlin was a generous, honest, fun-loving man who seldom rested, he was always tinkering with some project. Marlin and Norma were married for 53 years and he was a member of the American Legion for over 50 years. He was an avid Husker fan, enjoyed a good steak, a glass of Manischewitz wine and dinner out just about anywhere. Marlin passed away on Wednesday, January 29, 2020 at Brookestone Village in Omaha, Nebraska at the age of 91 years, 4 months and 10 days. He was preceded in death by his parents Herbert and Alma, wife Norma and grandson Ronald Lund, III. Marlin is survived by sons: Rodney of Elkhorn, Gary (Diane) of Bennington, daughters: Sandra (Greg) Gruber of Omaha, Janice Cohrs of Bennington, Patricia Thompson of Yutan, Diane (Jim) Roose of Kennard and Kathleen (Ronald) Lund of Bennington. 13 grandchildren and 11 great grandchildren; brother Loren (Marybeth) Cohrs of Blair; sister Jodeen Thompson of Waterloo, NE.

Memorials to Zion Lutheran Church or Bennington American Legion Post #266 Marlin Robert Cohrs was born on September 19, 1928 on a farm east of Bennington to Herbert and Alma (Schneekloth) Cohrs. He grew up in rural Bennington where he attended... View Obituary & Service Information

The family of Marlin Robert Cohrs created this Life Tributes page to make it easy to share your memories.

Send flowers to the Cohrs family.