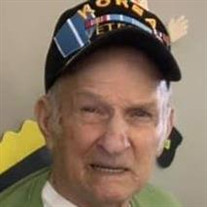 Marlin D. Lutz, age 88 of Elkhorn, NE and a former Benkelman Nebraska resident, died on Tuesday, May 28, 2019 at Elk Ridge Assisted Living in Elkhorn. He was born the son of Martin and Ella (Penn) Lutz on December 2, 1930 in Benkelman. He graduated from Parks High School. On July 11, 1952, Marlin was united in marriage to Gloria Parman in Benkelman. He would then enter the armed services to serve his country. He served two years in the Korean Conflict, where he was awarded the Purple Heart, the Korean Service Medal with Three Bronze stars, United Nations Service Medal, Good Conduct Medal, and the Combat Infantry Badge. After returning home, Marlin was engaged in farming in Dundy County, Nebraska, his lifelong passion. In 2008, Marlin retired from farming and moved to Benkelman where he and Gloria lived until 2018. He enjoyed working in his vegetable garden and flower beds while living in town. Due to health reasons they moved to Elk Ridge Assisted Living in Elkhorn, NE to be closer to the family. Marlin was a member of VFW and American Legion Post 65, and the Zion Lutheran Church in Benkelman where he was baptized as a child. His children, grandchildren, and great grandchildren were his life’s pride and joy. He was preceded in death by: his parents; brothers, Linn, Dale and LeRoy Lutz; sister, Leanna Andres; grandson, Michael McCreary and a great grandson, Harley Williams. Surviving Marlin: his wife of 66 years, Gloria Lutz of Elkhorn; daughters, Cindy (Charles) Lorenz of Yutan, NE and Peggy Bomer of Bellevue, NE; sons, Rick Lutz of Omaha, NE, Alan (Mary) Lutz of Sulphur Springs, TX and Jeff Lutz of Ogallala, NE; Eleven grandchildren and Ten Great Grandchildren. No services are planned at this time, his body has been cremated. The Reichmuth Funeral Home of Elkhorn is caring for the Lutz family at this time and memorials can be made to Dundy County Hospital in Benkelman, NE and can be left or mailed to the Reichmuth Funeral Home at P.O. Box 67 in Elkhorn, NE 68022

Marlin D. Lutz, age 88 of Elkhorn, NE and a former Benkelman Nebraska resident, died on Tuesday, May 28, 2019 at Elk Ridge Assisted Living in Elkhorn. He was born the son of Martin and Ella (Penn) Lutz on December 2, 1930 in Benkelman. He... View Obituary & Service Information

The family of Marlin Darrel Lutz created this Life Tributes page to make it easy to share your memories.

Send flowers to the Lutz family.