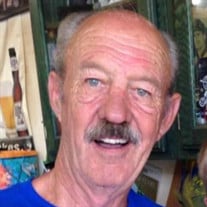 Martin P. “Marty” Lenhart was born September 25, 1949 in Omaha, Nebraska to Malvin and Maxine (Peterson) Lenhart. Marty grew up in Elkhorn, and attended all of his schools in Elkhorn, graduating from Elkhorn High School in 1967. After high school, Marty went on to earn a degree as a diesel engine tech. As a young boy, Marty was fond of riding his stick horses, throwing apples at cars, and was active in 4-H, showing goats at the county fair. Marty married Therese Perchal at St. Patrick’s Catholic Church in Elkhorn, Nebraska on July 11, 1970, and to this union, two children were born; Trevor and Mikki. The family made their home near Bennington, Nebraska. Marty worked at different places through the years; Midwest Refrigeration, Hill Bros., Carrier Transcold, and Monke Bros. Marty was active with the Elkhorn Eagle’s club, and the GEARS car club. He enjoyed golfing, camping in the Class C camper, and all things John Deere. But his true passions were drag racing and classic cars. From the yellow banana, the Orange Crush, and Bondo Babie, to the ’95 F250, the 55 Chevy, and the ’32 Bucket, he had fun with them all! When he wasn’t caring for the cars, Marty was a gifted story teller, and was always willing to help his family and friends whenever they needed. He was content to take care of the acreage and tend to his garden, but was always up for having a good time, whether that was playing volleyball or riding the golf cart down the quarter mile on the drag strip in Topeka. Marty enjoyed ‘50’s and Big Band music, playing slots on his Ipad, and the movie “Top Gun”. He was a St. Louis Cardinals fan, and looked forward to a dinner at Farmer Brown’s, where he may order the “Lobsteer” (lobster and prime rib), and was known to order a whiskey coke on occasion. He hated when you disrupted “The Bold and the Beautiful” or messed up his hair, and was famous for his saying, “…a time and place for everything”. Marty was a stubborn, stern, but caring and loveable man, and he cherished his family, his marriage to Therese, and the birth of Trevor and Mikki, and then Braylon and Huxley. He was known by a few different names; Martin Paul, Marty, husband, Dad/Daddy, #1 Papa, and now, Angel. Remember that Marty was a smart ass, but he was always willing to help, and he loved you no matter what. Marty died Tuesday, September 14, 2021 at CHI Lakeside Hospital in Omaha, Nebraska at the age of 71 years, 11 months, and 19 days. He was preceded in death by his parents Malvin & Maxine Lenhart. Marty is survived by his wife Therese of Omaha, son Trevor & Amy of Arlington, NE, and daughter Mikki Roza, and significant other Scott Turner of Bennington, NE grandchildren Braylon and Huxley Roza, and Bob the dog, brothers Mitchell & Roxanne, Mark & Kim, sister Michelle & Scott Klassen, and many nieces and nephews. Funeral service 10:30 AM Saturday at the funeral home in Elkhorn. Visitation Friday from 5-7 PM at the funeral home. Private interment. Memorials to the family.

Martin P. &#8220;Marty&#8221; Lenhart was born September 25, 1949 in Omaha, Nebraska to Malvin and Maxine (Peterson) Lenhart. Marty grew up in Elkhorn, and attended all of his schools in Elkhorn, graduating from Elkhorn High School in 1967.... View Obituary & Service Information

The family of Martin P. Lenhart created this Life Tributes page to make it easy to share your memories.

Send flowers to the Lenhart family.