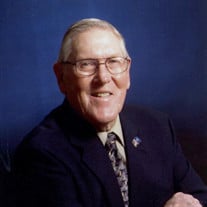 Martin Anton (Marty) Pedersen was born on December 16, 1929 on a farm in Platte Center, Nebraska to Neils Peder and Dagmar Ane (Jacobsen) Pedersen. Marty attended school in Platte Center, graduating from Platte Center High School in 1947. Following high school, Marty joined the U. S. Air Force, eventually attaining the rank of Airman 3rd Class. He was accepted into the pilot training program; however, he chose instead to be stationed closer to home requesting a transfer back to Nebraska, showing the importance of family to Marty. One of the highlights of his time in the service was when he met Colonel Paul Tibbets. While in the Air Force, he purchased a 1951 Allis Chalmers WD tractor because he intended to return to farming with his mother when he left the military. His life trajectory changed with the GI Bill and a chance to attend college. He earned a bachelor’s degree in business administration from the University of Nebraska at Omaha and was inducted into the professional business fraternity, Delta Sigma Pi. Marty worked for several years at N.P. Dodge Realty in Omaha earning his real estate license before starting his own company, Pedersen Construction Company. In 1960, Marty was set up on blind date by his cousin Gladys, with her neighbor, Delores Siefering. They married on August 25, 1960. This union was blessed with three girls: Terri (1963), Vicki (1965), and Tammy (1969). The family lived in homes built by Pedersen Construction Company, first in Omaha and then moving in 1973 to Riverside Lakes outside of Waterloo, Nebraska. Marty built homes in Omaha, mainly in the Maple Village and Raintree additions, and Lincoln. As a contractor, he was active in the Metropolitan Omaha Builders Association (MOBA) serving as the President in 1973. Throughout his life, Marty loved to travel and through MOBA, they traveled to several places with his dream trip to Denmark, Norway, and Sweden. Marty and Delores made many friends through their business, square dancing, and church. In 1981, the family lost Delores to cancer and Marty was left with three teenage girls to raise. In 1983, Marty married Sharon (Reinholdt) Kostinec, bringing four boys to the family creating the Pedersen-Kostinec Bunch. Marty enjoyed hunting and fishing with the Kostinec boys, especially the oldest, Terry, with whom he bought a cabin and enjoyed many trips to Canada. After many years at the helm of Pedersen Construction Company, Marty slowed down in the late 80s and took a job as a Construction Loan Officer for Commercial Federal Savings and Loan, retiring from this position in 1995. Additionally, because of smart real estate transactions, he invested in several rental properties. The importance of family was evident in his relationship with his children and grandchildren. Marty enjoyed spending time with both, but especially his grandchildren; going to sporting and school / church events, family holidays, camping, and taking each grandchild to Williamsburg and Washington D. C. He continued to travel with trips to various locations in the United States; and in his later years, took two special trips to Denmark to explore his family roots meeting distant cousins. As a full-blooded Dane, Marty was very proud of his Danish heritage, sharing this love of things Danish to his daughters and teaching them to make aebleskiver. Marty gave back to his community and church by donating to a variety of charitable organizations, participating in mission trips to Mexico, serving on the Waterloo School Board, as a member on the Board of Directors of Good Shepherd Lutheran Home, and serving in many volunteer positions at St. Mark’s Lutheran Church (Omaha) and Bethany Lutheran Church (Elkhorn). You cannot take the farmer out of the man and as a hobby, Marty collected and restored antique tractors with the help of friends. He also collected John Deere toy tractors. Finally, Marty will be remembered for his love of people. Marty never met a stranger and would engage everyone he met in conversation to learn more about them and discover their story. He was preceded in death by: his parents; 1st wife, Delores Pedersen; and a sister, Barbara Smetzer. Martin is survived by: his wife, Sharon Pedersen of Bennington; daughters, Terri (Mark) Summey of Emporia, KS, Vicki Dunkle of Blair, NE and Tammy (David) Bowes of Elkhorn, NE; 10 grandchildren; step-sons: Terry Kostinec, Robert Kostinec, Mark Kostinec, and Jerry Joseph Kostinec, III. and five step-grandchildren; a sister, Ane Ertzner of San Jose, CA; and a brother, Pete Pedersen of Omaha, NE. Memorials in lieu of flowers can be made to either Bethany Lutheran Church or Museum of Danish America at Elk Horn, Iowa at https://www.danishmuseum.org/.

The family of Martin A Pedersen created this Life Tributes page to make it easy to share your memories.

Send flowers to the Pedersen family.