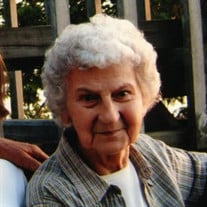 Memorials to Congregation of St. Joseph Attn: Sr. Pamela Owen CSJ9 2929 Nazareth Rd. Kalamazoo, MI 49048 or Quilts of Valor PO Box 191 Winterset, IA 50273 Mary was born on August 22, 1920, in Hroznova Lhota, Moravia, Czechoslovakia to Joseph Konecny and Anna Sramek. At age 3, she traveled by ship with her mother and younger brother Frank to America to join their father who had come ahead of them. They entered the country through Ellis Island in New York City, where their names are engraved on the island wall. She grew up primarily in southwest Michigan with family ties in Chicago. As a student in high school, she realized that she loved typing and office work. After high school, she attended Michigan State University for a year of further education and had a successful and fulfilling career as a manager of the credit department for Sears in Kalamazoo, Michigan. She enjoyed life as a single career woman and traveled with girl friends to Chicago and to Lake Michigan resorts on weekends and holidays. Dancing was a favorite activity at that time and throughout her life. Mary and Harold met on a blind date that she was reluctant to go on. Both were smitten and the rest - as they say - is history. They married on November 30, 1946, and started a family in Kalamazoo, Michigan. The result is 5 children, 13 grandchildren, 25 great- grandchildren, 7 great- great- grandchildren and more on the way. She was a loving and fulltime mother who encouraged independence. As young adults, we were allowed to make our decisions and mistakes and she was always there to be supportive and non-judgemental. Mary and Harold moved the the famiy to Lincoln, Nebraska, where Harold started his career with the Federal Aviation Association. The children all finished high school in Lincoln. Mary was active in church and school activities. She had a love for gardening and enjoyed canning the produce that she grew. Gladstone, Missouri, in the Kansas City area was their next stop as Harold’s career progressed. Mary continued to garden and always had beautiful flowers in the house and yard. She became a Tom Watson fan and golfed a bit herself. She took up bowling and they began traveling with friends. Retirement took Mary and Harold back to Michigan where they settled in St. Joseph and renewed family ties with the Chadderdons and her sister Millie Davis and her family. There were yearly family reunions and Christmas parties that they could easily attend. Mary and Harold continued to travel and rarely missed an important event in the lives of their children and grandchildren. She continued to garden and do yardwork and walking to stay active. She always said that “if you don’t move it you lose it”. Bowling was her passion and she was GOOD!! She continued to love dancing and music. When she couldn’t dance anymore she still tapped to the music with hands and feet. Mary’s last move was to Omaha, Nebraska, where family had the privilage of helping her through the last years of her life. We love you Mom and miss you!!! Preceded in death by son William (survived by his wife Kathrine Chadderdon of Omaha). Survived by children Robert (LeeAnn) of Wausau, WI, Catherine (Tom) Malone of Omaha, Thomas of Cedar Rapids, IA and Steven (Carolyn) of Madison, WI; 13 grandchildren and 25 great grandchildren. Sister Millie Davis of Bridgman, MI. Many nieces and nephews. Brother-in-law Gene Burgwald; sisters-in-law Vera Russel, Margaret Stafford, Grace Bonhomme and Sister Janet Chadderdon.

The family of Mary Ann Chadderdon created this Life Tributes page to make it easy to share your memories.

Send flowers to the Chadderdon family.