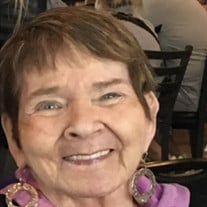 Memorials to the family which will distribute between 3 parishes that hold a special place in Mary’s heart. Mary Catherine Rittenhouse was born on March 2, 1945 in Chicago, Illinois to John and T erese (Towner) Hearity. She grew up in Chicago, attending St. Blasé grade school before moving to Omaha and graduating from Omaha Benson High School . Mary married John William Rittenhouse on December 19, 1972 in Sioux Falls, South Dakota and they were blessed with two children: Brian and Becky. After Bill and Mary were married they bought their first home in Arlington, Nebraska where Mary worked for Western Electric. In 1978 they moved to Wellington, Colorado for Bill to take on a new job, in 1980 they decided to move back closer to family. Mary enjoyed living close to all of her sisters and sisters-in-law as the kids were little. In 1984 they moved to Ogallala Nebraska, Mary was very active in St. Luke’s Parish and the children attended school there. Mary and Bill bought Oscars liquor and Mary also obtained her real estate license and flourished in real estate because she loved meeting new people and was a great salesperson because she was so well liked by everyone she came in contact with. In 1989, Bill’s job transferred them to Fort Collins, Colorado. Mary was busy with kids being in Junior High and High School. In 1991, Mary was diagnosed with Breast cancer and after chemo treatment, radiation and surgeries she became 29 years cancer free. In 1992, Bills job transferred them to Oshkosh. While in Oshkosh, Mary worked for the Garden County Assessor’s office and Marshalltown. In 1995 after the children were both graduated Bills job transferred them around to West Virginia, Texas and Arizona. After retiring they moved to Severance, Colorado for a short time to be closer to the kids and grandkids. In 2014 they decided it was time to move back to Omaha. Through all of her moving around she made many great friends that have always held a special place in her heart. Mary loved to be with family and friends, shop and collect bells and penquins. She treasured her lime green Mach 1. Mary was caring, humble, loving, sincere and spunky. She enjoyed bright colors, Rod Stewart especially “Maggie May”, Hallmark movies and roses. Mary always left you with a heartfelt “I love you”. Mary was one of a kind, always met you with a smile and the happiest attitude. She had the best giggle. She would do anything for her family and friends. Mary passed away on Monday, January 11, 2021 at her home in Gretna, Nebraska surrounded by her family at the age of 75 years, 10 months and 9 days. She was preceded in death by her parents John and Terese. Mary is survived by husband Bill; children Brian (Nicole) of Ft. Collins, CO and Rebecca (Bill) Hunt of Oshkosh, NE; grandchildren Kaitlyn and Gavin Hunt, Erik Montgomery and Hannah Rittenhouse; sisters Sheila Gleason of Des Moines, IA, Patty (Mark) Constantino of Omaha and Terri (Scott) MacNaughton of Omaha; brother-in-law and sisters-in-law Gary and Suzanne Rittenhouse of Waterloo, NE and Kris Hearity of Omaha; Nieces, nephews, cousins and friends.

Memorials to the family which will distribute between 3 parishes that hold a special place in Mary&#8217;s heart. Mary Catherine Rittenhouse was born on March 2, 1945 in Chicago, Illinois to John and T erese (Towner) Hearity. She grew up... View Obituary & Service Information

The family of Mary Catherine Rittenhouse created this Life Tributes page to make it easy to share your memories.

Memorials to the family which will distribute between 3 parishes...

Send flowers to the Rittenhouse family.