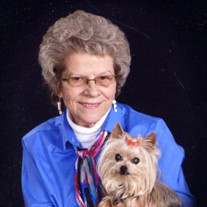 Mavis Klassen, age 87 of Elkhorn, NE died on Monday, March 30, 2020 at Elk Ridge Assisted Living in Elkhorn. She was preceded in death by: her parents; husband, Jerome Klassen; brothers, Lyle, Max (her twin) and Ernie Bahr; sisters, Wanda Teet, Betty Carter and Mrytle Lugsch; grandson, Ben Jarose; great-grandson, Zachary Ruhr and son-in-law, Wayne Langemeier. Mavis is survived by: her children, daughters, Diana Langemeier of Wayne, NE, Julie Jarose and Chris (Bill) Larsen both of Elkhorn; sons, Jerry (Marcia) Klassen of Arvada, CO, Mike (Jackie) Klassen of South Sioux City, NE, Rob Klassen of Sioux City, IA and Marty Klassen of South Sioux City, NE; Twenty-three grandchildren and Twenty-six great grandchildren; brothers, Rex Bahr of Portland, OR and Wayne Bahr of Vancouver, WA; sisters, Ruby Munkel of Midvale, UT and Phyllis Buzzelle of San Antonio, TX. Mavis was born on November 16, 1932 in Pine Camp, Nebraska to Ora C. and Sylvia V (Baker) Bahr. Mavis was one of 11 children. Mavis and her twin brother, Max, were the middle-children. Mavis grew up in West-central Nebraska and graduated from High School in Albion Nebraska in 1951. She rented a room from a lady in Albion while in high school, only seeing her family a weekend or two each month. In Albion, Mavis worked at a local restaurant as a server. It was there that she met Jerome V. Klassen. As they say, the rest is history. The two married in January, 1952. Jerome & Mavis had 7 children, Diana, Julie, Jerry, Mike, Chris, Rob & Marty. Those children generously gifted Mavis & Jerome with 26 grandchildren and 23 great-grandchildren Mavis enjoyed being a mom, wife and Grandmother. She was very involved with her children. Mavis never missed an opportunity to play baseball, kickball, monopoly etc. She also loved music and dancing, especially to Family tradition. Mavis’ life was centered around her husband, her children, grandchildren and serving others. Mavis & Jerry were married for 60 years and truly enjoyed being together. She enjoyed anything that involved family, music and dancing. Klassen Christmas was an annual celebration of family held every summer for 30+ years. She enjoyed gardening and had a prolific green thumb. Mavis’ work life included several years of caring for children and the elderly. She worked at Regency Care Center in South Sioux City for many years and at Cardinal Elementary. She volunteered for Hospice, her church, and was a member of the Catholic Daughters. Mavis also was a cub scout leader and a girl scout leader. Mavis would say her greatest accomplishment was being married to Jerome for 60+ years to see her children grow up and be successful, caring adults raising children of their own. The saddest day of her life was when her one true love passed in December of 2012. Her life changed forever on that day. Her advice to others would include “Love One Another, Set Your Dreams High, Explore the World, Don’t Forget to Stop & Smell the Roses.” Visitation will be held on Thursday, April 2, 2020 from 6 pm until 8 pm at the Reichmuth Funeral Home in Elkhorn, keeping in mind however, due to the Covid19 requirements, friends are reminded that only 10 visitors per room will be allowed, therefore some of the family may not be at the funeral home at the same time. Memorials can be made in Mavis’s name and left or mailed to the funeral home for designation at a later date by the family. Graveside services will be held at 11 am, Saturday, April 4, 2020 at St. Michael’s Catholic Cemetery in South Sioux City, NE with Fr. Anthony Weidner officiating. The Reichmuth Funeral Home of Elkhorn is caring for the Klassen family at this time.

The family of Mavis Irene Klassen created this Life Tributes page to make it easy to share your memories.

Send flowers to the Klassen family.