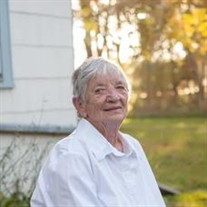 Maxine Mae Peterson Lenhart was born on February 20, 1926 in Elkhorn, Nebraska to Ferd and Martha (Benke) Peterson. She grew up in Elkhorn where she attended grade school and graduated from Elkhorn High School in 1943. As a young girl, Maxine was active working on the family farm and as a teenager, she worked at the Bomber Plant in Mead. After high school, Maxine venture out to California where she worked as a welder on Navy ships. Maxine married Malvin Lenhart on December 11, 1948 at her parent’s home on the south edge of town. Maxine and Mal were blessed with four children: Martin, Mitchell, Mark and Michelle. Maxine has remained in Elkhorn all these years. Maxine worked at Standard Oil for a while before the children came, then she took in ironing and babysitting until the children were grown. She worked at the dry cleaners for many years until her retirement. Maxine enjoyed reading, puzzles, photography and dancing. The family enjoyed many summer weekends at their cabin on the Missouri River with poker games and mushroom hunting and Max and Mal spent many winters in Texas after their retirement. Maxine was hardworking and adventurous, always up for a new challenge. She was an avid Husker fan, enjoyed Big Band music, a fried chicken dinner and a cold beer. Maxine passed away on Thursday, September 26, 2019 at Elk Ridge Assisted Living in Elkhorn, Nebraska with her family by her side at the age of 93 years7 months and 1 day. She was preceded in death by her parents Ferd and Martha, husband Malvin and brothers Leonard and Harvey. She is survived by her children Marty (Therese) of Omaha; Mitch (Roxanne) of Bennington; Mark (Kim) of Arvada, CO and Michelle (Scott) Klassen of Elkhorn; 8 grandchildren - Trevor ,Mikki, Nikole ,Adam, Zach, Emma, Elizabeth and Brad and 4 great grandchildren - Braylon, Huxley, Emerson and Aiden; sister Lesley Buss of Elkhorn. Memorials to the Elkhorn Historical Society

Maxine Mae Peterson Lenhart was born on February 20, 1926 in Elkhorn, Nebraska to Ferd and Martha (Benke) Peterson. She grew up in Elkhorn where she attended grade school and graduated from Elkhorn High School in 1943. As a young girl, Maxine... View Obituary & Service Information

The family of Maxine Mae Lenhart created this Life Tributes page to make it easy to share your memories.

Send flowers to the Lenhart family.