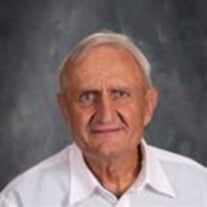 Bro. Mel Tichota, O.S.B., whose health had recently been in decline, died after a one day stay at a hospice residence. Bro. Mel was 77 years old. Bro. Mel was born Melvin Tichota in Howells, Nebraska on May 3, 1942 to the late Joe and Martha (Lennamann) Tichota. He attended Saint Wenceslaus Catholic Grade School in Dodge. In 1960, Bro. Mel graduated from Saint John Vianney Seminary (now Mount Michael Benedictine School). He attended Conception Seminary College in Conception, Missouri, earning his Bachelor of Arts degree. Bro. Mel worked with his brother, Francis, for a time on the family farm before offering to help a friend on a Sandhills ranch. Though the initial commitment was for two or three months, Bro. Mel stayed three years. There he relished life under the vast expanse of prairie and open sky. The Sandhills remained a favorite vacation spot. While on the ranch, Bro. Mel acquired a number of skills including trick-rope spinning. In 1978, Bro. Mel returned to Mount Michael. He professed his first vows to Mount Michael Benedictine Abbey in 1980. Bro. Mel began teaching freshman religion – Hebrew and Christian Scriptures – in Mount Michael Benedictine School. Moreover, he assumed the reins of the horse program for the School’s summer camp. Like a good monk, Bro. Mel assumed numerous other tasks in addition to his primary duties. He was a bus driver for many years, hauling athletic teams near and far throughout the school year. Bro. Mel enjoyed interacting with the coaches and student athletes he transported. He was fiercely loyal to his alma mater. Students and alumni from the school’s very beginning to the most recent graduating class were sought out by Bro. Mel. At Mount Michael home basketball games, Bro. Mel would mesmerize the packed gym with amazing trick-rope spinning. Concession sales slowed and the crowd left hungry to see another performance. Later Bro. Mel took several of his ropes and carefully coated them with fluorescent paint. On cue the gym lights were dimmed and country music played while Bro. Mel took his rope spinning to another level. Exhausted when the lights came back on, Bro. Mel would doff his cowboy hat and bow to the roar of an appreciative audience. Bro. Mel also performed at grade schools, civic functions and even for a run of ‘The Will Rogers Follies” at the Omaha Community Playhouse. The cowboy influence stayed with Bro. Mel throughout his life. If you asked him about a professional rodeo performer or trick roper, Bro. Mel could give you a full listing of information. He might even add the name of the bull or the horse ridden by the cowboy! Twice Bro. Mel made a trip to the rodeo national finals in Las Vegas. Bro. Mel covered a study hall or classes in the school when a substitute was needed. He served as moderator for a time for the student work program and assisted in the school’s athletic program. The cause of Bro. Mel’s death is likely related to congestive heart failure. But it was his heart, his ever-giving and ever-expansive heart, that he was known for by many throughout his life. He had a deep compassion for people, for nature, and for animals. Bro. Mel would fully give himself to anyone who asked. Bro. Mel was not afraid of hard work and seeing a project to its completion. Bro. Mel’s family upbringing led him to seek connections in everyone he met. Anyone would be greeted with a massive, strong handshake. And then he would pepper his new friends with questions about what they did, about their family, about their nationality, about their relatives and friends, and so on. The questions would continue with a deft agility by Bro. Mel to find familiar connections between his new friends and with others. Those forged connections would never be forgotten. He enjoyed those occasions over beverages and a meal to better know his friends. Throughout the year, Bro. Mel sent postcards – sometimes hand-made postcards – to countless people. His earthiness, while perhaps not totally in keeping with monastic decorum, endeared him to many. He was faithful to the monastic horarium. To the very end Bro. Mel did not want to miss prayer time or to miss community meals. Bro. Mel could be found in the chapel well before the start of prayer with a bible perched on his knee totally engrossed in Lectio Divina. Bro. Mel is survived by the community of Mount Michael Abbey as well as his sister Maureen Grubar, nieces and nephews. Preceding him in death were his parents Joe and Martha (Lennamann) Tichota, brother Francis Tichota, and brother-in-law Martin Grubar, Jr. A memorial Mass will be held at a later date. Condolences and memories can be left here.

Bro. Mel Tichota, O.S.B., whose health had recently been in decline, died after a one day stay at a hospice residence. Bro. Mel was 77 years old. Bro. Mel was born Melvin Tichota in Howells, Nebraska on May 3, 1942 to the late Joe and Martha... View Obituary & Service Information

The family of Brother Melvin Tichota OSB created this Life Tributes page to make it easy to share your memories.

Bro. Mel Tichota, O.S.B., whose health had recently been in decline,...

Send flowers to the Tichota family.