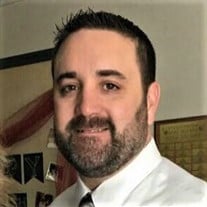 Master Sergeant Ret. USAF, Michael “Mike” A. Harris, 44, of Omaha, passed away Monday, February 17, 2020. He was born to Larry and Susan Harris in Temple, TX on February 3, 1976. He married his first wife, Mandy Hinson-Lykins on July 21, 1997 in Temple, Texas and was blessed with a son, Cody Landon Harris. On April 22, 2004 he married the love of his life, Jennifer Krings while stationed at Andersen Air Force base, Guam. He and Jennifer renewed their vows exactly two years later at St. Michael’s Catholic Church in Tarnov, Nebraska. They were blessed with two additional children, Aiden and Emma Harris. In 1995, Mike graduated Belton High School in Texas and joined the United States Air Force. He completed his basic training at Lackland Air Force Base in San Antonio and from there is when his career in the Air Force took off. While serving his country, he completed his Bachelors and earned a Master’s Degree in Business Administration with a concentration on Project Management. In 2011, he landed his dream job serving as a member of Nightwatch on the Doomsday plane at the National Airborne Operations Center at Offutt Air Force Base. He was the subject matter expert and certified command and control advisor to the President, Secretary of Defense, and Chairman of the Joint Chiefs of Staff. He served and retired after 20 years of honorary service to our Country. After retirement he worked as a Department of Defense contractor and ended his career with Constellation West working as a Nuclear Command Control and Communications Analyst Team Lead. Survivors include his wife Jennifer; his three children, Landon of Temple, TX, Aiden and Emma of Omaha, NE; his parents, Larry and Susan Harris of Texas; his sister Michelle (Nooner) Hudson of Texas; his grandparents Joe and Sue Heflin of Texas; his parent-in-laws Jim and Debbie Krings of Nebraska, brother-in-law Chad (Lizz) Krings of Nebraska; along with several aunts, uncles, nieces and nephews. He was preceded in death by his paternal grandparents, Leo and Helen Harris. The family is asking anyone who attends the wake service on Monday from 5 - 7 pm, wear your Dallas Cowboy attire or colors in honor of Mike's love for those Cowboys. Memorials in lieu of flowers can be made to the family for a college fund to be set up in his children’s names.

The family of Michael A Harris created this Life Tributes page to make it easy to share your memories.

Send flowers to the Harris family.