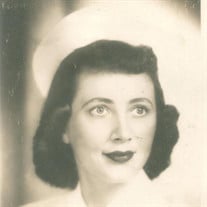 Nadine Fern (Asche) Dunker, of Bennington, NE passed away peacefully in Omaha, NE on June 5, 2020 at the age of 90 years, 11 months and 5 days. She was born on June 25, 1929 near Leigh, NE to Emil and Ida (Schutte) Asche. She grew up on a farm near Leigh with her four brothers and graduated from Leigh High School in 1947. Nadine went on to attend Bishop Clarkson Memorial School of Nursing. She was crowned Miss Clarkson and graduated in 1954 with a Bachelor of Science in Nursing. After graduation, she began her career as a Registered Nurse at Memorial Hospital in Schuyler, NE. There she worked with (and adored) her future mother-in-law, Caroline Dunker, before she had even met her future husband. She was married to Laurance “Larry” Dunker on September 29, 1956 at Christ Lutheran Church near Columbus, NE. They were blessed with five children during their marriage. After briefly living in Nebraska City, Lincoln, and Omaha, the family settled near Bennington, NE in 1963. Nadine was a stay-at-home mom when the children were younger, and was always involved with their activities, including music lessons, Cub Scouts, Boy Scouts, 4-H, hunting and sports (basketball, football, track, volleyball, trapshooting, etc.). Somehow she managed to prepare breakfast and pack lunches each morning, and have a hot meal on the table each evening. After the kids were grown, she returned to nursing, most recently at the Thomas Fitzgerald Veterans’ Home in Omaha, NE. Nadine truly enjoyed being a wife, mother, grandmother, and great grandmother. She was an avid reader and shared that passion with her children and grandchildren. She was also a master children’s story teller and would get lost in a book’s characters (Dr. Suess books were one of her specialties), to the delight of her audience. She had a special gift as a compassionate caretaker and was beloved by her patients for her bedside manner. She often received sincere commendations and gratitude for the kindness and professionalism she demonstrated throughout her nursing career. She also was a faithful member of Zion Lutheran Church in Omaha, NE, enjoyed volunteering and delivering Meals on Wheels, gardening, canning, polka music, and dancing. She had a great sense of humor and loved to tell some corny jokes. They were especially effective when she could remember the punch line. She was always ready to enjoy a cold beer with family and friends. Nadine was married to Larry for 56 years, until he passed away in December 2012. Nadine was hospitalized in September 2019 with a fractured hip. Other complications followed and contributed to increasing weakness and declining general health. Since March, she lived in her daughter’s home where she was fortunate to have the care of family and the company of loved ones. Nadine is survived by: Son – Todd (Barb) Dunker Granddaughter – Jordan (Brian) Doney Great Grandsons – Wyatt and Colton Granddaughter – Justine (Mark) Grimm Great Granddaughter – Anna Granddaughter – Taylor Dunker (Luke Johnson) Great Granddaughter – Adeline Granddaughter – Sarah Dunker Son – Lance (Michele) Dunker Grandson – Cannon Dunker Granddaughter – Eva Dunker Son – Clark Dunker (Lorie Jenkins) Grandson – Keaton Dunker Daughter – Laurel (Mitch) Keebler Granddaughter – Morgan Keebler Son – Curt (Anna) Dunker Grandson – Grant Dunker Brother - Eldon Asche Nadine was preceded in death by: Husband – Laurance Dunker Brothers - Norris Asche, Merlin Asche and Lowell Asche In lieu of flowers, memorials are suggested to Clarkson College of Nursing or Visiting Nurse Association. Private graveside services will be held on Wednesday, June 10 at Flower Hill Cemetery. In lieu of flowers, memorials are suggested to the Clarkson School of Nursing or Visiting Nurse Association. Condolences to www.reichmuthfuneralhomes.com Hadan-Golden-Reichmuth Mortuary Bennington, NE 402-289-2291

The family of Nadine Fern Dunker created this Life Tributes page to make it easy to share your memories.

Send flowers to the Dunker family.