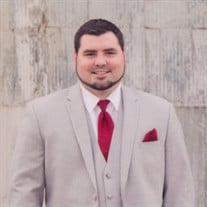 Nicholas A. “Nick” Dedinsky was born December 23, 1990 in Omaha, Nebraska to Scott and Lou (Davis) Dedinsky. Nick grew up in Omaha, where he attended Willowdale elementary school and graduated from Millard West High School in 2009. After high school, Nick attended both UNL and UNO majoring in Business. Growing up, Nick loved the outdoors, was active in soccer and football, enjoyed working out, and cherished time with family. He was especially proud to earn his Eagle Scout Badge. Nick married the love of his life, Lauren Niebuhr on March 10, 2018 at Bethany Lutheran Church in Elkhorn, Nebraska. They made their home in Omaha, and Nick worked various sales jobs, most recently for Casey’s. Nick was a funny, loyal, loving, sarcastic, and determined man. He furthered his love of the outdoors with hunting, fishing and camping, and looked forward to Husker game days. He welcomed Taz, the dog, into the family, and Nick was happy to play with Taz whenever he could. Nick was a huge Husker fan, who liked to go out for a crab leg dinner, especially to Red Lobster. His favorite color was green, and he enjoyed listening to country music, and watching comedy and action movies. He hated showing up late for events, and was known for his sayings, “No Fear”, or “Forever and ever, always and forever”. Lauren was the love of his life, and he held dear the day they were engaged (the day before his birthday in 2016 at the Falls Park in Sioux Falls), their wedding day, and the honeymoon they spent in Mexico. Nick will be remembered for his hugs, his humor, for always being willing to help, and for his love of friends and family. Nick died unexpectedly at his home in Omaha, Nebraska on May 7, 2020 at the age of 29 years, 4 months, and 14 days. He was preceded in death by his brother Christopher Dedinsky, grandparents Gilbert and Carol Dedinsky and Daryl and Marylin Davis, aunt Pamela Dedinsky, and father-in-law David Niebuhr. Nick is survived by his wife Lauren of Omaha, parents Scott & Lou Dedinsky of Omaha, brother and sister-in-law Michael & Jessa Dedinsky of Scottsbluff, NE, and dog, Taz. Private services to be held on Thursday, and will be live streamed on the Reichmuth Funeral Home website. Controlled visitation will be held on Wednesday from Noon to 8 PM with family present from 5-8 PM at the funeral home in Elkhorn. Memorials to the family.

Nicholas A. &#8220;Nick&#8221; Dedinsky was born December 23, 1990 in Omaha, Nebraska to Scott and Lou (Davis) Dedinsky. Nick grew up in Omaha, where he attended Willowdale elementary school and graduated from Millard West High School in 2009.... View Obituary & Service Information

The family of Nicholas A. "Nick" Dedinsky created this Life Tributes page to make it easy to share your memories.

Send flowers to the Dedinsky family.