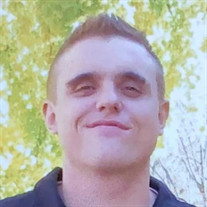 Memorials to the Town and Country Humane Society, 14110 S. 84 St. Papillion, NE 68046; Nicholas John Bull was born on February 21, 1985 in Omaha, Nebraska to Dave and Kathy (O’Connor) Bull. He grew up in Elkhorn where he attended Westridge grade school and graduated from Elkhorn High School in 2003. Nick went on to attend Washburn University in Topeka, Kansas where he was a member of the football team for four years. He enjoyed hunting, fishing and boating. Nick played football, basketball, baseball and track. Nick still holds the Eastern Midlands Conference record in the shot put with a toss of 59' 10" in 2003. He was a wizard at sports statistics and had a photographic memory ….if it was something that he liked! Even though he was a Cardinals fan, Nick’s favorite job was working for Brad Fedde mowing lawns. After his college football career, he played two years of semi-pro football in the Arena Football League with the Sioux City Bandits. Nick loved to go the family cabin on Ottertail Lake in Minnesota and take long drives with his dad to look for deer and turkeys. He enjoyed playing cards, especially pitch and going to car shows. Nick adored his nieces and nephews and loved his dogs Annie, Gemini, Murphy and Justify. His family remembers him as athletic, protective, unapologetic, big-hearted, humorous, intelligent, passionate, tough, strong-willed and competitive. Nick enjoyed music, watching television and was an avid fan of the Huskers, Chicago Cubs, Miami Dolphins, and the Tarheels. He loved eating chicken wings at the Lighthouse, beef enchiladas at El Bees, all you can eat tacos at Buck’s and Cinnamon Pop Tarts. Nick’s pet peeves were liars, gross smells and Abby’s jokes and he could often be heard saying “Let’s go for a ride”. He will be remembered for his kind heart, great sense of humor, being a hopeless romantic, his big brown eyes and his ability to be the life of the party. Nick passed away unexpectedly on Friday, April 24, 2020 at his apartment in Elkhorn, Nebraska at the age of 35 years, 2 months and 4 days. He was preceded in death by his paternal grandfather Gordon Bull, maternal grandfather Patrick O’Connor and maternal grandmother Constance O’Connor. Nick is survived by his parents Dave and Kathy of Elkhorn; sisters Erin (Donn) Kasner of Omaha, Kari (Mike) Winklepleck of Sioux City, IA and Abby (Chris) Sayers of Leigh, NE; grandmother Margaret Bull of Elkhorn; nieces, nephews, aunts, uncles and cousins.

Memorials to the Town and Country Humane Society, 14110 S. 84 St. Papillion, NE 68046; Nicholas John Bull was born on February 21, 1985 in Omaha, Nebraska to Dave and Kathy (O&#8217;Connor) Bull. He grew up in Elkhorn where he attended Westridge... View Obituary & Service Information

The family of Nick J Bull created this Life Tributes page to make it easy to share your memories.

Send flowers to the Bull family.