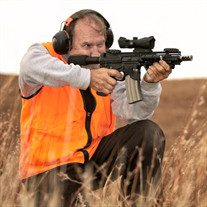 Nicky Ray Guffey was born September 15, 1954 in Muncie, Indiana to Lester and Helen (Van Natter) Guffey. The family moved to Papillion, Nebraska and Nicky graduated from Papillion-LaVista High School in 1974. Growing up, Nicky developed a life-long love for motorcycles and was a gifted mechanic. He was also a bit of a rebel child! Nicky enlisted in the United States Marine Corps in September 1974, and spent nearly 10 years in service to his country. He served as a heavy equipment mechanic and welder. He completed Non-Commissioned Officer Training School. He was honorably discharged in July 1984 holding the rank of Sergeant. Following his military service, Nicky began working as an over the road truck driver; driving several years for Flat Bed Express and then Fremont Contract Carriers. Away from work, Nicky loved riding his motorcycle, especially with his son, Troy, and his brother-in-law, Adrian. He was always working on something mechanical, but spent most of his time with his other hobby, his guns. He loved working with the guns; building and rebuilding them, and of course, shooting them. He belonged to 88Tactical and used their range at every opportunity. Nicky will be remembered as a hard-working man, who was very particular and stubborn, but also funny and caring. He enjoyed oldies music, a home-cooked meal, and a Coke. He liked to watch movies on his tablet and read books, and loved seeing his family, in spite of the time he left his nephew standing on the side of the Interstate in the snow! He became quite the builder, using wood for beds, tables, etc. He was very proud when he got his Big Dog Chopper and then finally bought his favorite car; his Dodge Charger. Most of all, Nicky had a deep faith and love of God. Nicky died unexpectedly at CHI Immanuel Hospital on January 12, 2021 at the age of 66 years, 3 months, and 27 days. He was preceded in death by his father Lester. Nicky is survived by his mother Helen, son Troy, mother of his son, Bonnie Guffey, grandchildren T.J., Kiera, and Brylie, brother Terry Guffey, sister Gail Pfahl, brother Leslie Guffey, extended family and all of Omaha. Funeral service Monday, 8 AM with coffee and muffin fellowship before the service at 7:30 AM at Grace Fellowship Church, 1211 S. 211th St., Elkhorn, NE. Graveside service with military honors by the Millard American Legion and VFW at Omaha National Cemetery at 10 AM Monday. Visitation Sunday from 4-8 PM at Reichmuth Funeral Home, Elkhorn. In lieu of flowers, memorials to www.americaswoundedwarriors.org.

The family of Nicky Ray Guffey created this Life Tributes page to make it easy to share your memories.

Send flowers to the Guffey family.