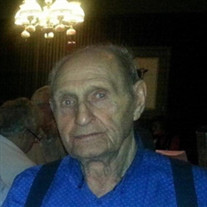 Memorials to United Faith Community Church Norman August Grashorn was born on September 7, 1926 in Wisner, Nebraska to George and Martha (Lawiniczak) Grashorn. He grew up on the farm near Wisner where he attended country school. Norm spent much of his time working on the family farm but in his spare time he enjoyed hunting and fishing. At an early age, Norm began to hire out to the local farmers. Norm enlisted in the United States Army and served his country from November of 1951 to October of 1953. He was deployed in Germany serving in the 7th Evac Hospital for much of his duty. Norm married Elaine Kollars on February 21, 1954 at the Methodist Church in Norfolk, Nebraska. They were blessed with four children: Gary, Duane, Sharon and Glen. Norm and Elaine made their home in Battle Creek for several years before moving to Valley in 1960. Norm worked as a farmer and worked at a local feed lot before joining 3-M. After his retirement from 3-M, Norm worked as a custodian for Valley Public Schools. Norm enjoyed fishing, dancing especially square dancing and polka, bowling and playing cards. He was a quiet, hardworking man with a dry sense of humor and an ornery streak. Norm enjoyed watching TV, was an avid Husker and Cubs fan and savored a meal of catfish, mashed potatoes and a cold beer. Norm passed away on Wednesday, August 14, 2019 at Heritage at Shalimar with his family by his side at the age of 92 years, 11 months and 7 days. He was preceded in death by his parents George and Martha and siblings Art, Dick, Hank, Herman, George, Edna & Arnold. Norm is survived by his wife Elaine; sons and daughters-in-law Gary of Bennington, Duane and Kathy of Fremont and Glen and Lorna of Bennington; daughter and son-in-law Sharon and Jeff Olson of Valley, Nebraska; 9 grandchildren and 10 great grandchildren; brothers Elmer of Clarinda, IA and Harold of Stanton, IA sisters Betty Eucker of Madison, NE and Irene Hansen of Tilden, NE;

Memorials to United Faith Community Church Norman August Grashorn was born on September 7, 1926 in Wisner, Nebraska to George and Martha (Lawiniczak) Grashorn. He grew up on the farm near Wisner where he attended country school. Norm spent... View Obituary & Service Information

The family of Norman A Grashorn created this Life Tributes page to make it easy to share your memories.

Send flowers to the Grashorn family.