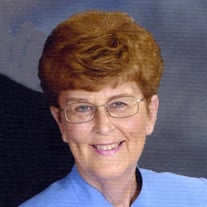 Memorials to United Faith Community Church or the Alzheimer's Association. Patricia (Pat) Ann Johnson was born September 30, 1938 in Armour, South Dakota, to parents: Merle and Gertrude (Mengenhausen) Lyons. She spent her childhood in Leshara, Nebraska and graduated from Valley High School in 1955. Pat married Franklin D. Johnson in 1959. Pat lived most of her life in Valley. Raising (with life-long husband Frank,) three children: Diane, Deryl and John. Pat began working at age 14 as a waitress at Miller’s Café. After raising her family, Pat worked for Stowe’s Hardware, Hartford Sand & Gravel, Flynn Plumbing and Heating, and for 15 years as a clerk for the OPPD (Omaha Public Power District). Pat was very active in the Valley Methodist Church and later United Faith Community Church where she served as a board member, women’s group chairperson, and a leader of many church Bazaars, Soup Suppers, and helped serve and supervise many funeral reception luncheons. Pat served several times as a room mother, den mother, weight watcher lecturer, and member of the Valley Lions Club. Pat was well known for her cooking and her holiday cookie trays. Pat and her husband Frank were longtime season ticket holders of the Nebraska Cornhuskers, passionate fishermen and friendly card/games players. After retirement, Pat & Frank had a cabin in Minnesota and spent most Februarys in Rockport, Texas with many other Valley snowbirds. One of Pat’s most cherished roles was as grandmother to Hannah and Madison Johnson. Pat died February 5, 2020 in Omaha, Nebraska. She was preceded in death by her parents Merle and Gertrude Lyons, her daughter Diane, husband Frank. Pat is survived by her sons: Deryl Johnson of Eagleville, PA and John (Judith) Johnson of Elkhorn; 2 granddaughters: Hannah and Madison Johnson; and her brother Larry (Jill) Lyons of Bellevue, NE. Pat will be missed and will be remembered for her commitment to family, friends, and to the church.

The family of Patricia Ann Johnson created this Life Tributes page to make it easy to share your memories.

Memorials to United Faith Community Church or the Alzheimer&#39;s...