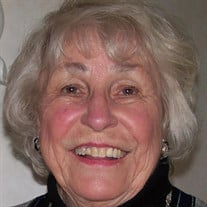 Memorials to St. Patrick's Catholic Church, Sienna Francis House or Open Door Mission. Live Stream available On Monday at 10:30 AM at https://webcasts.lifetributes.com/1131712 Patricia Ann (Scott) Smith was born on September 12, 1932 in Omaha, Nebraska to Jay and Anna Scott. She was the apple of her father’s eye especially and never missed an opportunity to spend time with him. She met the love of her life, Jim Smith, at Omaha North High School. After meeting Jim, she converted to Catholicism, and they were strong in their faith throughout their lives. Pat and Jim were married on November 25, 1950 at Sacred Heart Catholic Church in Omaha, Nebraska. Pat worked at World Insurance in the early days of their marriage and raised four children: Timothy, Sandra (Leavitt), Lauren (Kobza) and Nancy (Scheufele). Pat was a great source of strength to Jim as he started his own business and while he tended to growing it, Pat focused on their family. She loved to cook, entertain and enjoyed golfing with good friends and spending time with family. She and Jim were fortunate to travel to several countries, enjoyed cruises to Alaska and the Caribbean and in later years, traveling to escape the Omaha winters for San Diego after their children were grown. Pat also enjoyed painting, reading, and she and Jim enjoyed watching Creighton basketball. She and Jim remained devoted to their church and were generous with supporting several charities. With their love of golf, Pat and Jim lived in the Oak Hills Country Club area with their beloved dog Boo for many years, a home where the entire family celebrated holidays and weekend get-togethers. Pat and Jim moved to Elkridge Independent Living in later years, and Pat remained there after Jim passed away in 2015. She was moving to Heritage at Sterling Ridge but unfortunately passed away before she could enjoy it, on April 9, 2021 the age of 88. In addition to Jim, Pat was preceded in death by her parents and her brother Raymond. Pat is survived by children Timothy and Paulette Smith, Sandra and Russ Leavitt, Lauren and Wayne Kobza and Nancy and Bill Scheufele all of Omaha; eight grandchildren and eight great grandchildren; and sister-in-law Joan Ehrenberg of La Vista.

The family of Patricia Ann Smith created this Life Tributes page to make it easy to share your memories.