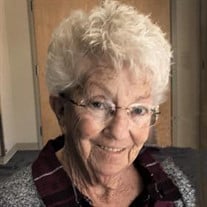 Patsy Ruth Stepp was born November 25, 1945 in Inez, Kentucky to Millard and Myrtle (Preece) Stepp. Patsy Ruth grew up in Inez graduating from Inez High School. The youngest of 9 children, Patsy grew up playing in the mountains of eastern... View Obituary & Service Information

The family of Patsy Ruth Polak created this Life Tributes page to make it easy to share your memories.

Send flowers to the Polak family.