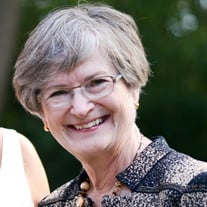 Paulette Peters was an artist. She was a traveler, a quilter, a teacher, an author, a great friend and a proud and much-loved wife, mother, sister, aunt, grandmother, great-aunt, and mother-in-law. Born in Council Bluffs, IA, Paulette graduated from Lincoln Southeast High School and attended St. Elizabeth’s School of Nursing, where she made lifelong friends and met Terry Peters, an engineering student from Gordon, NE. Terry and Paulette were married in 1962 and began their 50-year life together. Paulette earned her private pilot’s license in the mid-70s and earned a Psychology degree from St. Joseph’s College in Maine in 1983. In the 1970s, Paulette joined with friends to start House on the Hill Quilters in Elkhorn. Over the years, she taught quilting to hundreds of women, building on her interest in quilting and its long tradition of bringing women together to create beautiful and functional works of art. Paulette wrote quilting books and traveled the country teaching. She represented Nebraska in two national quilt competitions sponsored by the Museum of Folk Art in New York and was asked to represent Nebraska with a piece for the Christmas tree skirt at the White House in 1993. She was a founding member and former president of Cottonwood Quilters and the Nebraska State Quilt Guild and was active in both groups until her death. She was very involved in the creation of the International Quilt Museum at the University of Nebraska and served on the Friends Board there for many years. She served on multiple boards locally, including the Elkhorn Women’s Club, Omaha Town Hall and the Munroe-Meyer Institute and she and Terry helped to found the Elkhorn Public Schools Foundation. Paulette could always be counted on to provide quilts for fundraising events in Omaha and across the State. In her later years, Paulette traveled the world with Terry and their good friends. Each place she visited resulted in a quilt that expressed her experiences in far-flung parts of the world. Paulette was preceded in death by her husband, Terry Peters. She is survived by her children Leslie (Dan Rubright) of St. Louis, MO; Mike (Francie) of Ponte Vedra Beach, FL; and Gregg (Nikki) of Vermillion, SD and her grandchildren: Sydney, Riley, Reece, Adam, Grace and Matthew, and by many family members and friends who will miss her and her caring demeanor and gentle laugh. In lieu of flowers, contributions may be made in her name to the Preservation Fund at the International Quilt Museum at the University of Nebraska: (https://nufoundation.org/give/university-of-nebraska-lincoln/international-quilt-museum/).

Paulette Peters was an artist. She was a traveler, a quilter, a teacher, an author, a great friend and a proud and much-loved wife, mother, sister, aunt, grandmother, great-aunt, and mother-in-law. Born in Council Bluffs, IA, Paulette graduated... View Obituary & Service Information

The family of Paulette A. Peters created this Life Tributes page to make it easy to share your memories.

Paulette Peters was an artist. She was a traveler, a quilter,...