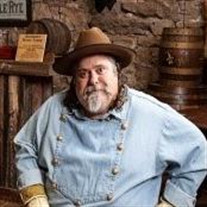 Philip Prorok, 60, of Lead, SD passed away from Pulmonary Arterial Hypertension on December 24, 2019 at Methodist Hospital in Omaha, NE surrounded by his loving family. Philip was born in Columbus, NE on August 13, 1959 to Duane S. and Zita M. (Kuntz) Prorok. He was the second of six siblings. He began his education in Columbus and in 1966 moved to Valley, NE where he graduated from Valley High School in 1977. Phil worked at various jobs including the Dehy Alfalfa Mill in Columbus and was a Photographer at the Columbus Telegram. He worked in food sales in Sioux City, IA and Amarillo, TX. As Chef he moved around from Omaha, Columbus, North Platte, Aurora, CO, Sioux City, IA and Lead, SD. At the end of his life he worked doing Western reenactments and tours in the Wild Bill Bar in Deadwood, SD where he loved sharing his in-depth historical knowledge with others. He enjoyed hunting, fishing, relic hunting and spending time in the great outdoors. He looked forward to spending time with family, and sharing a few beers with friends. Philip was preceded in death by his wonderful mother, Zita (Kuntz) Prorok; grandparents Sal and Clara Prorok and Jacob and Mary Kuntz. He is survived and will be missed by his father, Duane of Valley, NE; siblings Greg (Linda) of Elkhorn, NE; Christine (Mark) Jensen of Pickett, WI; Vicki (Doug) Heeren of LeMars, IA; Ronald (Missy) Prorok of Marshall, MN and Patrick Prorok of Onawa, IA; along with many devoted nieces, nephews and good friends. Mass of Christian burial will be held at 10:30 am, Friday, December 27, 2019 at St. John’s Catholic Church in Valley with Rev. Lloyd Gnirk officiating. Burial will follow at the Pleasant View Cemetery near Leshara, NE. Visitation with the family will be held 1 hour before service time at the church on Friday. A lunch will be at the church following the internment at the cemetery. Memorial in lieu of flowers to: Genoa Indian Industrial School Museum and can be left or mailed to the funeral home. The Reichmuth Funeral Home in Elkhorn, NE is caring for the Prorok family at this time.

Philip Prorok, 60, of Lead, SD passed away from Pulmonary Arterial Hypertension on December 24, 2019 at Methodist Hospital in Omaha, NE surrounded by his loving family. Philip was born in Columbus, NE on August 13, 1959 to Duane S. and Zita... View Obituary & Service Information

The family of Philip Duane Prorok created this Life Tributes page to make it easy to share your memories.

Philip Prorok, 60, of Lead, SD passed away from Pulmonary Arterial...

Send flowers to the Prorok family.