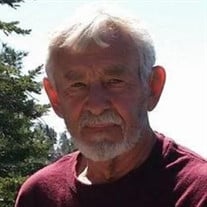 Informal memorial with the family present from 3-7 pm on Wednesday, March 10th, at Reichmuth Funeral Home in Elkhorn, NE. Please dress as you are comfortable, however, masks will be required. Phill’s long-standing request was for cremation, so there will be no viewing. Phillip R. Finch, 76, of Waterloo passed away in Harlingen, TX on February 24, 2021. Phill was born to Kenneth Finch and June Brown Finch on August 15, 1944 at Ft. Leonard Wood, MO, and spent his childhood in Fraser and Boone, IA. He graduated from Elkhorn High School in 1962 and joined the Navy where he was stationed at the North Pole on an ice breaker. Phill met Karen Everingham on an outing with friends, and they were married September 24, 1966. They were blessed with three children, Jodi, Kristi and Russell. After leaving the Navy, Phill worked briefly for the Union Pacific Railroad. In 1972 he began working at Industrial Electric Motors until he retired in 2001. He was a member of International Brotherhood of Electrical Workers Local 22. Throughout his life, he was a member of Bensonvale Covenant Church, Overland Hills Baptist Church, Westwood Church, and Bethany Lutheran Church. Most recently, he and Karen attended Cowboy Church of the Valley when they were in Texas, and online during the summers. Phill and Karen moved to Timberlodge Lake in 1994, where their family and friends built many great memories on and around the water. In 2015, after Karen retired, they bought their first motor home and began spending their winters traveling, one year to Arizona, and then throwing the proverbial dart at a map, ending up in LaFeria, TX at LaFeria West RV Park for the past five winters. They made many close friends at LaFeria, who are deeply loved. Left to cherish Phill’s memory are his wife of 54 years, Karen, their children Jodi (Shane) Freeman, Kristi (Scott) Jones, Russ (Shawn) Finch; eight grandchildren Travis (Jenelle) Finch, Kylah Finch (Terrence Mullen), Madi Hall (Jordin Wendelin); Matthew (Kylie Cole), Ben (Emily Karmazin) and Jack Jones; and Amanda and Abby Finch; brother Ken (Judy) Finch, brother-in-law Ken (Pat) Everingham, nephews and niece Eric (Emily) Everingham and Gracelyn and Landon, Sara (Shane) Noble and Megan Jenkins, Josi, Dalton & Misty, and Joe (Nicole) Everingham and Kenzie, Cade and Ryan. We would be remiss not to mention his little dog Lucy. Preceding him were his parents, his brother Tony Finch, and his in laws, Paul and Norma Everingham. Phill was a man of few words, but those who knew him knew that he cherished his family (especially the grandkids) and his dogs, especially Lucy. Memorials may be made to Cowboy Church of the Valley/Western Outreach Center in LaFeria or DreamCatchers, a nonprofit youth support program founded by daughter Jodi. Cowboy Church: https://tithe.ly/give_new/www/#/tithely/give-one-time/778306; 11235 Swift Ln, Santa Rosa, TX 78593 DreamCatchers: www.facebook.com/DreamCatchersRide; 6640 Adams Street, Lincoln, NE 68507

Informal memorial with the family present from 3-7 pm on Wednesday, March 10th, at Reichmuth Funeral Home in Elkhorn, NE. Please dress as you are comfortable, however, masks will be required. Phill&#8217;s long-standing request was for cremation,... View Obituary & Service Information

The family of Phillip Russell Finch created this Life Tributes page to make it easy to share your memories.

Informal memorial with the family present from 3-7 pm on Wednesday,...

Send flowers to the Finch family.