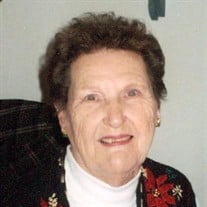 Memorials to United Faith Community Church Phyllis Ann Ocander was born on December 1, 1930 in Dow City, Iowa to William and Gladys (Shafer) Ten Eyck. She grew up in Dow City where she attended school. Phyllis married Marvin Daugherty in March of 1946 in Dow City and later married Don Ocander in December of 1954 in Wahoo, Nebraska. Phyllis was blessed with four children: Sandy, Gloria, Myron and Debra. She has lived most of her life in Valley, Nebraska with winter trips to Texas. In recent years, Phyllis has called Blair, Nebraska home. Phyllis has worked at Western Electric, her own Beauty Salon, owned trucks, her Ceramic Business and a Mary Kay representative. She was a talented and creative painter, seamstress and quilter. Phyllis loved her grandchildren, great grandchildren and the two great great grandchildren. She was well-liked, giving and classy and would freely give her opinion on any subject. Phyllis enjoyed a good Margarita and dinner out at Red Lobster. Phyllis passed away on Monday, December 16, 2019 at Nye Legacy in Fremont, Nebraska at the age of 89 years and 15 days. She was preceded in death by her parents, husband, daughter Sandy, 7 brothers, 3 sisters and great grandchild Ali Mae. Phyllis is survived by her son Myron of Omaha; daughters Debra (Randall) Martin and Gloria (Charles) League all of Blair; 9 grandchildren, 17 great grandchildren and 2 great great grandchildren;

The family of Phyllis Ann Ocander created this Life Tributes page to make it easy to share your memories.

Send flowers to the Ocander family.