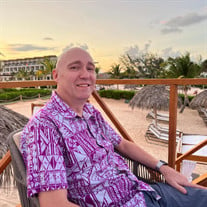 Preston Hehr (49) — loving husband, father, son, brother, and friend — passed away on Wednesday, February 9, 2022, in Omaha, Nebraska. Born on March 25, 1972, to Kerry and Annette Callen Hehr, Preston grew up in Green River, WY. He graduated from Green River High School in 1990 and attended Dakota State University in Madison, South Dakota. He and Lara Cummins married in Rock Springs, WY, on April 4, 1992. Four children were born out of this loving union: Lochlan (29), Kyra (22), Koen (18), and Ryker (12). The family has lived in Omaha since 1997. Preston was a successful entrepreneur. He owned InfiNET Development, Inc., a web applications and database company, serving as president from 2002-2008. After he sold InfiNET, Preston took his many skills to Benaissance, acquired by Wex in 2015, where he started as a senior developer/architect and later moved into the role of vice president of enterprise architecture. In 2021, he took advantage of a great opportunity and joined Podimetrics, serving as software development manager and director of software development. Podimetrics remembers Preston as “an incredible soul with a big heart, bringing warmth and encouraging words to his teammates and friends.” Known for his intellectual curiosity, Preston was a lifelong learner. He eagerly shared new and innovative ideas with his colleagues at work and applied what he learned to his hobbies, of which there were many. While spending time with his family and traveling topped his list of favorite pastimes, Preston also enjoyed golf, gaming, 3D printing, Legos, music, Husker football, Formula 1 racing, Dad jokes, metal working, computers, and all things tech. Preston was deeply loved and will be enormously missed for his kind heart, determination, loving nature, active mind, and strong devotion to his family. Preston is survived by his wife Lara, children Lochlan, Kyra, Koen, and Ryker, father Kerry (Susan) Hehr, sister Chandra (Brian) Westerfield, father-in-law Lee Cummins, sisters-in-law Kirsten (Chad) Timmer, Katie (Jim) Nedrow, brothers-in-law Adam (Jessica) Cummins, Eric (Cynthia) Cummins, and by loving nieces, nephews, cousins, aunts, uncles, and other relatives. He is preceded in death by his mother and stepfather Annette and Don Haney, and mother-in-law Karen Cummins. During the service, there will be an opportunity to share memories of Preston. Celebration of Life service 11 AM Wednesday at the funeral home in Elkhorn. Visitation Tuesday Noon-7 PM with family receiving friends from 5-7 PM at the funeral home. Private interment. Memorials to the family for later designation.

The family of Preston T. Hehr created this Life Tributes page to make it easy to share your memories.

Send flowers to the Hehr family.