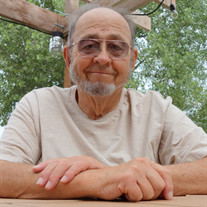 Ralph Exstrom, age 80 years of Valley, NE, died on Wednesday, June 12, 2019. He was born the son of Paul and Thurza (Almquist) Exstrom on June 17, 1938 in Maxwell, NE. Ralph received his Bachelors Degree from Kearney University, and later his Masters from University of Cincinnati in Cincinnati, OH. On August 9, 1956, Ralph was united in marriage to Peggy G. Burke at his parent’s home in Maxwell. Ralph spent more than 30 years teaching math, science and computer science and directed numerous plays throughout his career. He loved teaching and directing where he connected with thousands of students - he specialized in helping those who maybe didn't have a lot of confidence in their abilities develop and gain confidence. Many students became good friends following graduation. He had many hobbies where he brought passion and demonstrated how life-long learning can expand your world and impact. Fishing was at the top of his list - he taught all of his children and grandchildren how to fish and spent hours at Jeffrey Lake (his favorite place on earth!) with them. The 'Jeffrey Fishing Gang' had an annual trip for over 40 years - wonderful and lasting friendships formed at the lake! Woodworking occupied his time over the cooler months and he developed his skills from really rough projects in the early years to beautiful creations that many enjoy every day. Ralph was also the photographer at every family event, celebrations with friends and throughout his teaching career. He has hundreds of thousands of slides and photos (on paper and digital!) that document events big and small. He also had a beautiful singing voice and shared that gift - especially around the house where every occasion could be celebrated in song. He cheered on all the Husker teams - especially the Women's Volleyball team and appreciated Husker Football even in the tougher years - he was no fair weather fan. Ralph was known for his logical thought process and when he added humor, passion and caring to the mix, nothing could stop him. He was blessed by a loving family and a vast group of great friends and will be missed but has left them all with fond memories' He was preceded in death by: his parents; wife, Peggy; son, Rodney Exstrom and a daughter, Sue Rolfe. Ralph is survived by: his children, Deb Exstrom of Elkhorn, Steve (Angela) and Scott (Nancy) Exstrom all of Valley; son-in-law, Mike Rolfe of Falls City, NE; Grandkids: Andrea (Joseph), Ashley, Gillian, Rodney, Christopher, Meredith, Catherine and Jessica. Great grandkids: Kenzi, Blake, Charlie, Zoe and Emori; brothers, Paul and Donald Exstrom, and a sister, Mardell Brestel. Ralph would love to see a 'sea of husker red' from those who gather to celebrate his life, so at a request of the family – wear your Husker gear.

The family of Ralph D Exstrom created this Life Tributes page to make it easy to share your memories.

Send flowers to the Exstrom family.