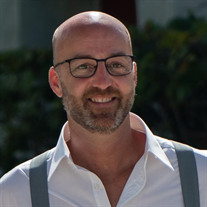 Richard Jon Casebeer was born on May 1, 1966 in Omaha, Nebraska. Growing up, he looked up to and adored his two older brothers, Mike and Dan. Rick enjoyed playing soccer and his father, Casey, was his coach. Along with a love for soccer, Rick and his dad loved watching NASCAR races together. In his early twenties, you would find Rick in the DJ booth at Skateland. He was the most popular DJ, even if he did embarrass his niece, Shannon, when she was there with her friends from time to time. Rick was always an avid Kansas City Chiefs and Nebraska Cornhuskers fan. On game days, you would find him in his “game day gear” ready to cheer on his beloved teams. Aside from football, Rick loved golf. He played every opportunity he could. If he couldn’t play golf, he would watch golf on television, especially the Masters, which he watched up until the last days of his life. On December 21, 2001, Rick wed Caroline. Rick and Carol blended their families: Rick’s two children, Colby and Tori, with Carol’s two children, Ashley and Blake, along with Carol’s niece, Swan. Rick was always jamming and loved to sing, especially to Carol. He would serenade Elton John’s “Your Song” to her and called it her song. He even shared his voice with the masses as lead singer of SideCar69, with his band brothers. For several years, you would find them headlining a show with a huge following in Omaha and surrounding areas. Rick passed away November 12, 2020 after a long and courageous battle with cancer. While his life was cut short, his memory will live on forever with those who knew and, inevitably, loved him. He was preceded in death by: his parents. Rick is survived by: his wife, Carol Casebeer of Waterloo, NE; sons, Colby Casebeer of Illinois, Blake Lee of Waterloo, NE; daughters, Victoria (David) Glockel of Omaha and Ashley (Justin) Franson of Waterloo, NE; grandchildren, Kiara, Jayden and Harrison; brothers, Michael (Kathi) Gripp of Springfield, NE and Daniel (Dana) Casebeer of Omaha. A memorial has been set up in his name for the Nebraska Cancer Society and they can be left or mailed to the funeral home.

Richard Jon Casebeer was born on May 1, 1966 in Omaha, Nebraska. Growing up, he looked up to and adored his two older brothers, Mike and Dan. Rick enjoyed playing soccer and his father, Casey, was his coach. Along with a love for soccer, Rick... View Obituary & Service Information

The family of Richard "Rick" Casebeer created this Life Tributes page to make it easy to share your memories.

Send flowers to the Casebeer family.