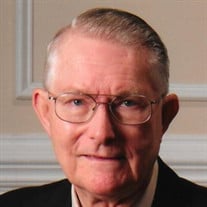 Memorials to Gideons International or National MS Society Richard William Hartford was born on November 15, 1935 in Omaha, Nebraska to Ernest and Ruth (McCann) Hartford. Walter and Ethel (Hamilton) Hartford raised Dick after his mother’s death when he was four months old. He grew up in the Valley area, attending District 15 Country School and continuing at Valley High School graduating in 1953. Dick went on to study at the University of Nebraska at Lincoln earning a Bachelor’s Degree in Business Administration Dick married Ardith Hughes on June 6, 1959 at 2nd Presbyterian Church in Lincoln, Nebraska. The couple first resided in Omaha. They were blessed with four children: Tim, Jeanne, Alan and Jill. Dick and Ardith raised their family in Valley and Fremont before returning to Omaha in 1986. Dick served in the US Army National Guard from 1958-1964, the first 9 months as active duty. He then spent most of his career in sales. First in computers, business machines, and equipment then structural steel and basement waterproofing services. He completed his Master’s Degree in Counseling in December 1990, anticipating that his MS would progress. He worked as a vocational rehabilitation counselor before his retirement. Dick was very active in church activities, Big Brothers, and Gideons International. Dick and Ardith volunteered at the Rose Theater, Orpheum and Holland Center. The couple were always engaged in small groups at church and loved to attend and host gatherings with their friends. Dick enjoyed playing cards and reading the newspaper. He was sincere, thoughtful and a diligent worker. Dick enjoyed Husker football and rarely missed a broadcast. When he was still able, he would get down on the floor to play with the grandkids and later enjoyed giving them rides on his scooter. As the grandkids got older, Dick was often engaged with them in a game of cards or a board game. Dick passed away unexpectedly on April 22, 2021 at The Lighthouse at the age of 85 years, 5 months and 7 days. He was preceded in death by his parents Ernest and Ruth, Walter and Ethel, and wife Ardith. Dick is survived by children Timothy (Teresa) Hartford of Pleasant Prairie, WI; Jeanne Kalina of Omaha; Alan Hartford of Medford, MA and Jill (Gerald) Huebert of Omaha; 11 grandchildren Ryan Hartford of Los Angles, CA; Thomas Hartford and David Hartford of Pleasant Prairie, WI; Rachel (Dan) Becker of Pleasant Prairie, WI; Zachary Kalina and Rebecca Kalina of Omaha, Jacob Huebert, Andrea Huebert and Bryson Huebert of Omaha; Valentine Hartford and Troy Hartford of Medford, MA. Great grandsons Oliver and Mason Becker; sisters Leora Hartford of Waterloo, NE and Maureen Pollmann of Edina, MN.

The family of Richard William Hartford created this Life Tributes page to make it easy to share your memories.

Send flowers to the Hartford family.