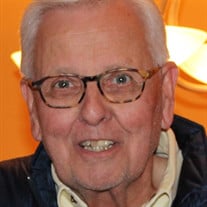 Richard (Dick) Dean Johnson, age 83, of Omaha, NE died Wednesday, January 8, 2020 at Crown Pointe in Omaha. Born in Willmar, MN to Chauncey and Esther (Hedin) Johnson. Dick was proceeded in death by his parents and grandparents as well as a son-in-law, John Taylor. Dick is survived by: his wife, Jan of Omaha; children, Jeff Johnson (Dawn) of Denver, CO, Jodi Taylor of Solon, OH, Jill (Brad) Turpin of Versailles, KY, Jay (Amy) Johnson of Lexington, KY and Jennie (Chris) Kennedy of Appleton, WI; along with eleven grandchildren. Dick’s whole life revolved around his family and work. Work was truly his passion and hobby all wrapped up in one. Starting at age 9, he worked carrying bags at the local hotel. He moved onto running his own band in high school (playing several different percussion instruments himself) and truly loved playing on the high school hockey team with much success. After high school, the world of entertainment drove him to Las Vegas where he performed as a magician and a ventriloquist for many years followed by a move back to the mid-west where he joined the National Guard. Dick then had a stint at the Sodrac Dog Park as announcer (and consequently met his wife) and finally moved onto his life’s work as a Trade Show Producer. Dick was the CEO of Cox Johnson Corporation in Omaha for 56 years. The Omaha International Boat, Sport and Travel show was truly his pride and joy. Throughout this time, Dick was also an avid horseman, breeding and racing thoroughbred race horses. He also enjoyed his periodic big game fishing trips to Alaska, Canada and Montauk, NY. Dick did not believe in ever saying good-bye, so instead, we will just say, “so long, till we meet again!” Memorial service will be held at 11:00 am CST, Saturday, January 25, 2020 at the Reichmuth Funeral Home in Elkhorn, NE with Rev. Kip Tyler officiating. Burial will follow at the Prospect Hill Cemetery in Elkhorn, NE. A small luncheon will follow the Burial service. Memorials can be made in lieu of flowers to the Nebraska Humane Society.

Richard (Dick) Dean Johnson, age 83, of Omaha, NE died Wednesday, January 8, 2020 at Crown Pointe in Omaha. Born in Willmar, MN to Chauncey and Esther (Hedin) Johnson. Dick was proceeded in death by his parents and grandparents as well as... View Obituary & Service Information

The family of Richard D. Johnson created this Life Tributes page to make it easy to share your memories.