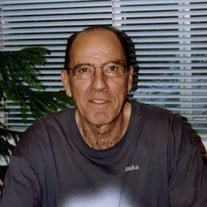 Richard Schutt was born August 10, 1943, to loving parents Walter and Mildred (Lawver) Schutt. He grew up in the Tekamah/Herman area, and was the youngest of 6 children. Richard graduated from Tekamah/Herman High School in 1961. Richard was the proud father of six children: Angie (AJ) Fundermann, DeAnna Montes, Kevin Schutt (mother, Clara Lierman), and David Schutt, Tamara Fisher and Susan Schutt (mother, Darlene (Kucera) Schutt); Ten grandchildren; Sydney and Taylor Fundermann, Ashley and Justice Montes, Abi and Jake Schutt, Emma, Lyla and Bella Schutt, and Cooper Fisher; One great-grandchild; Genesys Ellis. Richard worked hard to provide for his family and was easily one of the hardest working laborers at his various farming, warehouse, and manufacturing jobs. Richard had a kind heart, and a loyal, loving spirit. He was honest and sincere, and a loyal friend and companion. Richard had a great sense of humor and loved to joke around with anyone who would engage with him. Aside from spending time with his family, Richard enjoyed collecting classic model cars, putting puzzles together, and watching a good western or crime drama on T.V. He also enjoyed dining out at his favorite local diners. Richard loved striking up conversations with his waitresses, and became a regular and friend to many. Richard had a special place in his heart for his children and grandchildren. His eyes would light up whenever he had the opportunity to see them. As a father, you could always count on him in times of joy and in times of need. Richard suffered a stroke in 2016, which led to short term memory loss, and the onset of vascular dementia. He has been in memory care since 2016, spending he last few months at Immanuel Fontenelle Village. Richard entered into rest on January 10, 2021, at the age of 77. We are grateful for the time we had, and thankful he is now at peace. He was preceded in death by: his parents; wife, Darlene; sister, Edith Mogensen; brothers, Donald, Dale, Kenneth and Stanley. Funeral service will be held at 11 am, Thursday, January 14, 2021 at Reichmuth Funeral Home in Elkhorn with burial to follow at the Garner Township Cemetery in Council Bluffs, IA. Visitation will be held from 9 am till the time of service on Thursday at the funeral home.

Richard Schutt was born August 10, 1943, to loving parents Walter and Mildred (Lawver) Schutt. He grew up in the Tekamah/Herman area, and was the youngest of 6 children. Richard graduated from Tekamah/Herman High School in 1961. Richard was... View Obituary & Service Information

The family of Richard LeRoy Schutt created this Life Tributes page to make it easy to share your memories.

Send flowers to the Schutt family.