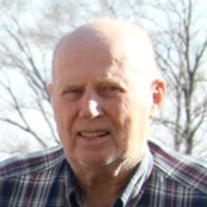 Richard Oscar Toy, age 89 of Waterloo, NE, died on Saturday, March 12, 2020 at Lakeside Hospital in Omaha. He was born the son of Alfred R and Jesse (Talcott) Toy on April 18, 1930 in Omaha, NE. Richard grew up in Valley, Nebraska and graduated from high school in 1948 after which he then joined the US Marines in September 8, 1948 until his honorable discharge August 15, 1952. Richard was united in marriage to Arlene Carol Hanefeld on June 21, 1952 in Minneapolis, Minnesota. He owned Dick‘s Tree Service for many years which kept him very busy. During his free time, Richard loved to hunt, fish and Trap Shoot for which he won many trophies. According to Jim Keepers, NAA Newsletter Coordinator, who wrote this about Richard; He was very proud to be one of the 29 NAA Charter Members who formed the Nebraska Arborists Association (NAA) back in 1977. He still had his 1st Class Omaha Arborist License but considered himself a semiretired Arborist. He never held an official NAA board position but was very active in the association. Dick conducted numerous Arborist training sessions during those early association years. His main business in and around the Omaha area was spraying, pruning and removal of trees, and planting of trees. Dick received the Nebraska Arborists Association ‘Arborist of the Year’ for 2012, at that time he was in semi-retirement years, he did mostly stump grinding. Dick was an associated member of the Valley Nebraska Tree Board and he was a great source of knowledge for the Board when it came to tree planting and removal. Because of his efforts, the City of Valley did receive the Nebraska Arbor Day Foundation Tree City USA Award. He was preceded in death by: wife, Arlene; brothers, Don, Robert, Howard and Fred Toy; and a sister, Patricia Nestlebush. Richard is survived by: many nieces, nephews and friends.

Richard Oscar Toy, age 89 of Waterloo, NE, died on Saturday, March 12, 2020 at Lakeside Hospital in Omaha. He was born the son of Alfred R and Jesse (Talcott) Toy on April 18, 1930 in Omaha, NE. Richard grew up in Valley, Nebraska and graduated... View Obituary & Service Information

The family of Richard O Toy created this Life Tributes page to make it easy to share your memories.

Send flowers to the Toy family.