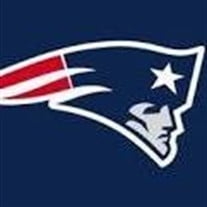 Memorials to the family for later designation Robin Mitchell Samson was born on November 6, 1966 in Omaha, Nebraska to Duane and Betty (Farnam) Samson. He grew up in Valley, attending grade school and graduating from Valley High School in 1985. As a young boy, Rob enjoyed all sports, especially football, hanging out with friends and camping with the family but his passion was the New England Patriots. He attended Peru State College before heading into the work world. Rob married Danette Peterson on February 10, 1990 at St. Mark’s Lutheran Church in Valley, Nebraska and they were blessed with a daughter, Amanda. Rob and Danette have always made their home in Valley. Rob worked at 3M for 31 years as a Production Service Operator. He often put in a 12 hour shift 7 days a week. In his down time he enjoyed golfing, watching the Patriots, trying to stump people with music trivia, watching Amanda play softball and supporting Chase Brown Racing. Rob was a strong, loving and loyal man full of life and fun. You could often find him sitting on his back porch, rocking out to his favorite music, with a cold Busch Light in hand. Rob passed away on Monday, April 8, 2019 at his home in Valley (the family home of his youth), surrounded by his family at the age 52 years, 5 months and 2 days. He was preceded in death by his parents Duane and Betty and brother Rick. Rob is survived by his wife Danette; daughter Amanda (Nick) Mace of Omaha; siblings Linda and Roger Fallon of Elkhorn, Doug and Theresa Samson of Valley and Kevin Samson of Omaha; 57 nieces and nephews, great and great great nieces and nephews; additional family, Judy Samson of Valley; 2 grand puppies.

Memorials to the family for later designation Robin Mitchell Samson was born on November 6, 1966 in Omaha, Nebraska to Duane and Betty (Farnam) Samson. He grew up in Valley, attending grade school and graduating from Valley High School in... View Obituary & Service Information

The family of Rob Samson created this Life Tributes page to make it easy to share your memories.

Memorials to the family for later designation

Send flowers to the Samson family.