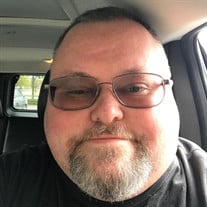 Robert “Scott” McMillan was born November 4, 1974 in Pascagoula, Mississippi to Robert L. McMillan, Jr. and Bonnie (Roberts) McMillan. Scott grew up in Mississippi, and attended school at Lucedale Elementary before graduating from George County High School in 1993. Scott attended Jones County Junior College, then the University of Tennessee, where he earned his Master’s degree in Industrial Organization and Psychology in 1999. Throughout his schooling, Scott played the saxophone, and he was fortunate to be able to perform at Carnegie Hall and march in the Orange Bowl Parade. He also took part in multiple musicals, including “The Fantasticks”, “Music Man” and “Carousel”. Scott married Sarah Hahn on August 6, 2011 at The Falls in Lincoln, Nebraska. He became the father to Arianna Hahn, and later their son, Liam was born. The family made their home in Omaha, Nebraska. Scott worked for Nestle Purina, and then for many years in Human Resources with Union Pacific Railroad. He was known for being a funny, loving, smart, amazing, and calm man. He had a dry sense of humor, and enjoyed Star Wars movies, the color red, and sipping a Moscow Mule. He loved sushi and dinner out at Pitch, and was always ready to try new foods. And he also loved to send pictures of whatever new item he was trying to his mother-in-law! Scott was a huge Husker fan, but never understood why Nebraskans like Runzas. Scott spent his free time fishing, gaming, watching super hero movies, building Legos with Liam, and practicing Tae Kwon Do. He was proud of his education, and cherished Sarah and his kids. He will be remembered for his sense of humor, his love of his family, and being Sarah’s rock. Scott died unexpectedly on Tuesday, November 2, 2021 at Lakeside Hospital in Omaha, just two days before his 47th birthday. He was preceded in death by his parents Robert & Bonnie, brother Joel, grandparents Paul & Eunice Roberts, and Robert Louis McMillan, Sr. & Martha, and uncles; Calvin, Cecil, and Charles Roberts, and Billy Glenn McMillan. Scott is survived by his wife Sarah, children Arianna Hahn and Liam McMillan, his brother Tony McMillan, nephew Blake McMillan, niece Halaigh Terrell, and uncle Clyde & Susie Roberts. Memorial service 11 AM Saturday, December 18 at Bethany Lutheran Church, Elkhorn. No visitation. Private interment. The family requests no flowers or plants, and memorials may be made to the family.

The family of Robert "Scott" McMillan created this Life Tributes page to make it easy to share your memories.

Send flowers to the McMillan family.