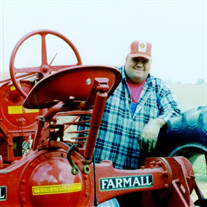 Robert (Bob) (Hooch) Thompson was born the son of Warren, also known as “Hooch” and Betty (Morton) Thompson on April 7, 1965 in Omaha, NE. He grew up on the family farm north of Elkhorn where he attended Dist. 27 Sunnyside Country School. Off of the farm, Bob was involved in Elkhorn Valley Little League Baseball, and played football for the Antlers at Elkhorn High where he graduated in 1983. He attended UNL for a short time, but decided instead to go back and help work the farm together with his uncle Wayne (Beno) because of his father’s passing in 1981 when he was just 16 years old. Beno passed away in 1992, and Bob and his mother, Betty kept the farm going. Bob met Michelle (Shelly) Bauer from Omaha and they were united in marriage on July 16, 1994 and purchased a farmhouse and 80 acres of family homestead from Bob’s grandmother Irene Thompson. Bob and Shelly had a son, Jake in November of 2002 and he was the light of Bob’s world. Jake quickly learned the love of all things farming, RED tractors, and even some of that stubbornness from his Dad. After Betty’s passing in 2010, Bob and Shelly along with Jake have continued on the same farm. Bob never ventured far from agriculture – his ‘spare’ time was spent wrenching on hunks with friends, tractor pulling, and antique threshing shows. Bob was a member of the Elkhorn Valley Antique Power Association for many years. He even participated in the longest classic tractor parade in the Guinness Book of World Records in Grand Island, NE in August of 2012 with a total of 964 tractors. Lots of time was spent at the Ponderosa Bar in Elk City with many friends to have a few Bush Lights, fill the Jukebox with some Hank Williams, JR and AC/DC and most often to get a “Penni” cheeseburger on “Pondo Sundays”. Bob passed away on Saturday, September 14, 2019 in Omaha at the age of 54 years with Shelly by his side. He was preceded in death by: his father, Warren, mother, Betty, many Aunts and Uncles and a good friend, Kenny Erickson. Bob is survived by: his wife, Shelly; son, Jake, “Little” Hooch; his brother, Rich and sister, Kathy; along with many close friends. Memorials can be made to the family and will be designated at a later date to an Ag related program. The Reichmuth Funeral Home is caring for the Thompson family at this time.

Robert (Bob) (Hooch) Thompson was born the son of Warren, also known as &#8220;Hooch&#8221; and Betty (Morton) Thompson on April 7, 1965 in Omaha, NE. He grew up on the family farm north of Elkhorn where he attended Dist. 27 Sunnyside Country... View Obituary & Service Information

The family of Robert W. Thompson created this Life Tributes page to make it easy to share your memories.

Send flowers to the Thompson family.