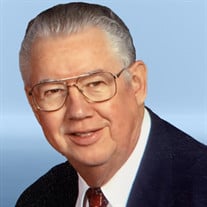 Rodnee Cecil Brown was born on August 25, 1937 and went to his heavenly home on March 31, 2022. Rodnee grew up in Galva, Iowa with two brothers, Doyle and Gary, and a sister, Janice. The boys enjoyed playing baseball and selling popcorn at games in town with the help of the rest of the family. After graduating from Galva High School in 1954, Rodnee moved to Omaha and married the love of his life, Dina Andresen, on May 26, 1956. Rod and Dina were blessed with three children, Steven, Larry, and Lori. Rod and Dina were inseparable throughout their marriage and were an example to many in their genuine affection, care, and devotion for one another. Rodnee’s love of baseball carried on throughout his life. He was a founding member of Country Club Little League of Omaha, where he coached his sons for many seasons. In his later years, his TV was often tuned to a baseball game. Rod started working at Union Pacific railroad at age 19, where he was known as R.C. Brown. He worked his way up in the company and was the Director of Budget and Planning when he retired. He enjoyed sharing stories of his lifetime of work there. Rod and Dina moved to Green Valley, Arizona after Rod’s retirement, where they lived for the rest of their lives. They went on many adventures and traveled extensively. Rod and Dina built a large community of friends in Green Valley and cherished the memories they made together. Rod was dedicated to service, and in his retirement assisted others with tax preparation. Rod and Dina were also involved with their church, Lutheran Church of the Risen Savior, where Rod served in multiple capacities, including singing in the choir and serving on various boards. Rod will be remembered for his integrity and dedication to his community. He set the bar for what a loving husband, father and grandfather should be, and that legacy lives on in his beloved family. Rodnee is preceded in death by his wife, Dina, and his son, Larry; parents, Cecil and Leta; brothers Doyle and Gary, and his sister Janice. He is survived by his son, Steven and wife Corinne; daughter, Lori Hansen and husband Darren; daughter-in-law, Claire; six grandchildren, Caitlin (Kent), Seth (Karen), Sanders, Lindsay (Victoria), Rebecca, and Grace (Hali); Sisters-in-law, Karen Brown and Janet Brown; brother-in-law Harlan Andresen, and many nieces and nephews. Services for Rodnee will be held at 11 am, Saturday, April 23, 2022 at Zion Lutheran Church, 14205 Ida Street, Omaha, Nebraska. Rodnee will be reunited with his wife, Dina, in the columbarium at Lutheran Church of the Risen Savior in Green Valley, Arizona at a later date. Memorial donations in the memory of Rod Brown should be addressed to: Lutheran Church of the Risen Savior, 555 S. La Canada Drive, Green Valley, AZ 85614.

Rodnee Cecil Brown was born on August 25, 1937 and went to his heavenly home on March 31, 2022. Rodnee grew up in Galva, Iowa with two brothers, Doyle and Gary, and a sister, Janice. The boys enjoyed playing baseball and selling popcorn at... View Obituary & Service Information

The family of Rodnee Cecil Brown created this Life Tributes page to make it easy to share your memories.

Send flowers to the Brown family.